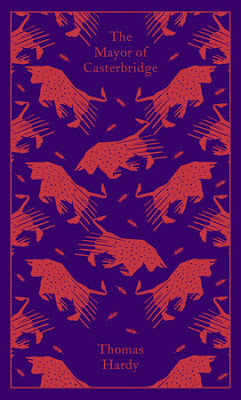 Writers have radically different views on Thomas Hardy.  D. H. Lawrence considered Hardy the best novelist of the 19th century; Stella Gibbons criticized Hardy's (and Lawrence's) "loam-and-lovechild" novels and satirized them in Cold Comfort Farm.  Hardy's fans have their differences:  some prefer his reputed masterpieces,  Tess of the d'Uurbervilles (one of my favorites) and Jude the Obscure (too melodramatic even for me), while I dally with The Woodlanders and A Laodicean.

My favorite is The Mayor of Casterbridge, an almost- perfect Greek tragedy set in England in the 19th century.  The prose is exquisite, the plot intricate, and the structure a ring composition.

In this masterpiece, Hardy charts the rise and fall of Michael Henchard, who, as a young man, tragically gets drunk at a fair and sells his wife, Susan, to a sailor, Newson, for five guineas, along with their daughter Elizabeth-Jane.  When Michael sobers up, he searches for them but cannot find them. And so he vows to abstain from alcohol for 20 years, and moves to Casterbridge, where he succeeds as a grain merchant - and becomes the mayor.

Years later, Susan and Elizabeth Jane return to the scene of the fair, where Susan tries to find word of Michael, because her other "husband," Newson, has died.   They find Michael in Casterbridge, and he makes amends by marrying Susan, who is awed by his beautiful house and riches; but he had planned to marry his long-time mistress, Lucetta.  Eventually, Lucetta moves to Casterbridge.

Ironically, Michael's marriage to Susan, which raises both Susan and Elizabeth Jane up several classes, is the beginning of Michael's downfall.  There are many twists:  there is a mystery about the identity of his daughter, not revealed until after Susan's death.

But mostly this is a novel about jealousy.  Hot-headed Henchard  becomes jealous of the popularity of a  brilliant young Scotsman, Farfrae, a scientist, whom he once liked, and hired as the manager of his business; he fires him, but then cannot compete with Farfrae as a rival businessman.Farfrae and Elizabeth Jane are interterested in each other, but Henchard forbids him to see her.   Farfrae gradually obtains everything Henchard has or had, including Lucetta.  Henchard thinks Farfrae is deliberately setting out to wreck his life  - and one can see why he thinks it, but Farfrae regrets the loss of their friendship. 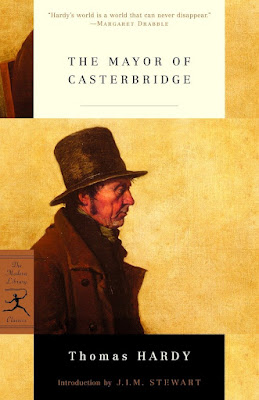 I love nothing more than a good wallow in a Hardy novel:  an uncritical enjoyment of his lyrical if occasionally heavy-handed prose (but the style is uniformly elegant in The Mayor), athe characters' tragic love affairs, the descriptions of Wessex (the fictional county where his novels and stories are set),  and  the complicated structures of his novels.

However, J. I. M. Stewart (a Hardy scholar, novelist, and  writer of mysteries under the pseudonym Michael Innes) is not as partial to The Mayor of Casterbridge as I am.  In his introduction to the Modern Library edition, he cannot resist a certain dry mockery. He thinks Hardy's novel benefited from being written as a weekly serial: "Above all, the quick manipulation of event and character required by his crowded fable keeps Hardy's hands fully occupied so that he has leisure for but few of those large cosmic gestures which have threatened to become routine with him."

And there are more observations in this caustic vein.  He writes, "[The characters] seem resigned to parting or coming together, to dying or bobbing up from the dead, with a precision and punctuality in terms of the proposed exhibition suggestive of a factory in which an advanced state of automation has been achieved."

Very witty, but...   I do at least agree with Stewart when he says that Michael Henchard is one of Hardy's most memorable male characters - and one of the best in English literature.

J.I.M. Stewart is a  scholar and the author of Thomas Hardy:  A Critical Biography. I have enjoyed J. I. M. Stewart's novels, but found his critique of The Mayor of Casterbridge a bit depressing.  It is a mistake for Hardy fans to get mixed up with the critics, I always say.  And I have read this novel so many times -  why did I bother with the introduction?

Email ThisBlogThis!Share to TwitterShare to FacebookShare to Pinterest
Labels: The Mayor of Casterbridge, Thomas Hardy