The Reading Life: Budi Darma's "People from Bloomington" and Mary Essex's "Tea Is So Intoxicating" 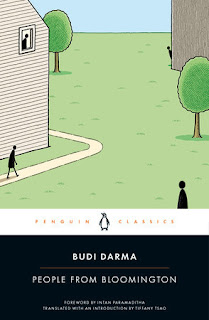 I highly recommend the Indonesian writer Budi Darma's People from Bloomington, a collection of short stories newly translated by Tiffany Tsao.  Like Darma, I attended graduate school in Bloomington, a beautiful, idyllic college town in Indiana, so I was curious about this book.  Although as a midwesterner I "assimilated" effortlessly, and loved the culture so much I would never have left had there had been any jobs, Darma, a student from Java, was isolated and lonely.  I am horrified by the descriptions of xenophobia in some of the stories: even when  Americans are friendly, there is a distance between cultures.

In the preface to this book,  first published in Indonesia in 1980, Darma writes,

After the close of August 1974, I left Indonesia for Bloomington - a town in Indiana, in the United States.  Once there, I began to feel anxious- what if I didn't have any time to write?  Indeed, this proved to be the case.  I had to deal with an enormous amount of work for my studies, which afforded no time for my own writing.

Ironically, he was getting a master's in creative writing at the time.  He finished his Ph.D. in English in Bloomington in1980.

Darma's stories are remarkable, poignant and comical.  In "The Old Man with No Name,"  the narrator rents a cheap room in the house of a mean-spirited old woman, Mrs. MacMillan, who insists that he communicate with her only by phone, and that only when necessary.  The neighborhood is far from campus, and farther still from College Mall, which the narrator deems the center of social activity.  When a strange old man with a gun rents a room in their neighbor's house, the narrator regards him as a potential friend. He stalks the old man, interrogates the owner of the neighborhood store about his habits (the old man likes doughnuts), and pathetically leaves  notes and phone messages asking him to be his friend.  One day, he sees the old man racing around Dunn Meadow pointing a gun at people and saying Bang-bang.  This is disturbing, and things don't end well.  A story of incredible loneliness.

In "Joshua Karabish," an accidental plagiarist's identity merges with a dead poet's.  The narrator's roommate, Joshua, a slightly grotesque, unattractive student poet, dies of a rare disease whose symptoms include bloody noses and smelly mucous exuding from his ears.  Joshua had longed to be a great poet, but had speculated that his poems would have a greater chance of posterity if he pretended they were newly discovered works of Keats or another dead poet.  And after Joshua's death, the narrator is surprised to discover the high quality of the poems, and submits them under his own name to a poetry contest sponsored by the Modern Language Society. Almost immediately, he begins to suffer symptoms of Joshuas's disease.  Is he sick, or is it guilt?

On a lighter note, I enjoyed Tea Is So Intoxicating by Mary Essex.  Like E. M. Delafield's Tension, this is a title in the British Library Women Writers series.

I love tea, and could not resists a super-light novel about the struggle to start a tea shop.  David Thompkins, a Second World War veteran, has eloped with  Germayne, who was dying of boredom with her dull husband and impossibly bumptious daughter, Ducks. David and Germayne have bought a fixer-upper, Cherry Tree Cottage, formerly known as Higgins-Bottom, in a village in Kent, and they think it is wonderful, despite the plumbing problems.  David decides to open a tea shop there.  Unfortunately, Mrs. Arbroath, the richest woman in the village, campaigns against the tea house, because there is a rumor is that the couple are not really married.  Indeed, they do get married in a civil service as soon as Germayne's divorce comes through.  But Mrs. Arbroath does not approve of divorce, either.

David is determined, despite many business mistakes, and also insists on hiring the seductive Mimi, a Viennese refugee, as cake cook.  Germayne is so  exhausted by David's dithering about the tea shop and annoyed by Mimi that she can hardly keep up with everyday demands.   But a visit from Ducks, Germayne's rambunctious teenage daughter, shakes everything up, and is a blessing in disguise.  In fact, I couldn't help but think of Nancy Mitford's The Blessing, though Ducks certainly did not intend to cause the unforeseen ending.

And so how's the reading life going?   Any recommendations?  Any summer reading plans?

Email ThisBlogThis!Share to TwitterShare to FacebookShare to Pinterest
Labels: Budi Darma, Mary Essex, People from Bloomington, Tea Is So Intoxicating