The Poetry Section: In Swinburne's Corner


At the Royal Academy of Arts in London, I recently saw the exhibition, Whistler's Woman in White:  Joanna Hiffernan.  Joanna, nicknamed Joe, was Whistler's lover and the model for several of his famous paintings, including the three "Symphonies in White." Gustave Courbet also painted her portrait.  These paintings are spellbinding.

I was also thrilled to see the manuscript of a poem by Algernon Charles Swinburne, who was a close friend of Whistler and Hiffernan, and was inspired by the painting, "Symphony in White, no. 2.)  I squinted at the manuscript in a glass case but could not make it out in the dimly-lit gallery. Perhaps with opera glasses...  I bumped my head against the glass trying to get closer to the poem.

Why was I so distracted by Swinburne at a Whistler exhibition?  Well, I am besotted with Victorian poetry.  The rhymes and meter!  The mythological subjects! The gloom and the ghoulish obsession with death!

I don't much like Swinburne's"Before the Mirror" (which I read after the exhibition), but here are two stanzas from "The Garden of Proserpina," in which Swinburne displays his hyper-gloom and obsession with death.

She waits for each and other,
She waits for all men born;
Forgets the earth her mother,
The life of fruits and corn;
And spring and seed and swallow
Take wing for her and follow
Where summer song rings hollow
And flowers are put to scorn.

There go the loves that wither,
The old loves with wearier wings;
And all dead years draw thither,
And all disastrous things;
Dead dreams of days forsaken,
Blind buds that snows have shaken,
Wild leaves that winds have taken,
Red strays of ruined springs. 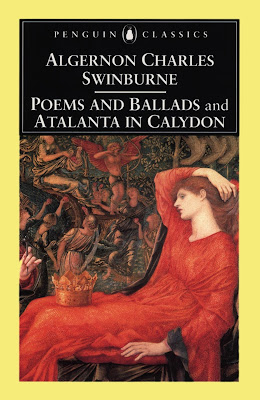 I love this poem - though pretty much everybody criticizes everything by Swinburne.  According to Kenneth Haynes in his introduction to the Penguin edition of Poems and Ballads & Atalanta in Calydon,  the reception of Swinburne's poetry was often negative.  Robert Browning objected because the verses "combine the minimum of of thought and idea in the maximum of word and phraseology."  Swinburne's mother complained that her son didn't know when to stop....  and Matthew Arnold was offended by 'Swinburne's fatal habit of using one hundred words where one would suffice."   Some poets, of course, were in Swinburne's corner: Thomas Hardy, Yeats, A. E. Housman, and Ezra Pound.

Swinburne is often enchanting and unexpected:  He experiments with meter.  According to the Penguin introduction, he wrote in 420 different verse forms - more than any other Victorian poet.

THE POETRY SECTION:  DOES IT STOCK SWINBURNE?

After the exhibition, I lookded for Swinburne in a London bookstore. My attitude was,  Well, you never know.

And there it was - in the first store I entered!

It was the Penguin that I already have, but put this in perspective:  where I live in the U.S. - let us call it the wilds - you do not walk into a bookstore and find Swinburne.  No, you order it from Amazon, Abebooks, eBay, The Book Depository, etc.

Now this is the point where I realized I was probably not living the life I was meant to live. My lips may have quavered as I wrote the following humorous entry in my diary, "You mean -  Londoners can walk into a bookstore and find poetry in the poetry section ?"

Instead of National Poetry Month, we should have a Poetry Shopping Day.  Wouldn't it be lovely if we all bought a poetry book on the same day and the bookstores had to replenish their poetry section?

The exhibition, Whistler's Woman in White:  Joanna Hiffernan, will be at The National Gallery in Washington, D.C., July 3-Oct. 10.