Ovid on His Mistress's Abortion 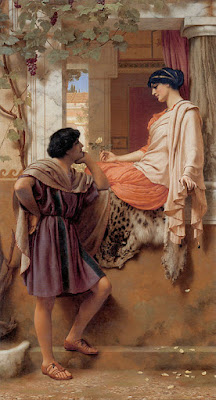 In view of the Supreme Court's recent draft of an opinion that would overturn Roe v. Wade, I have reposted an adapted version of one of my former posts on Ovid's poems about abortion.

Ovid wrote two poems about abortion (Amores 13 & 14); he was the first Roman poet, to my knowledge,  to write elegies about abortion.  The first poem in Ovid’s diptych is sympathetic to his ailing mistress Corinna, whose abortion has gone drastically wrong.  He begins the first poem (I cannot write poetry; this is very effective in Latin verse, but we have no comparable meters in English, so this is my quick, literal translation):

While she rashly is overthrowing the burden of her womb,
Weary Corinna lies in danger of her life.
Having attempted so great a danger without telling me
She deserves my anger, but my anger dies with fear.
But indeed she had conceived by me, or  so I believe.
It is often for me a fact because it can be.

In the next lines Ovid writes a formal prayer to Isis, a maternal goddess and healer who had a cult in Rome, and assures her that Corinna honors her and has participated in her rites on the designated days. Then  he prays to Ilithia, the Greek goddess of childbirth. He promises to bring gifts and incense.  “I will add the inscription, "Naso has given this for Corinna’s recovery.”  (Ovid's full name is Ovidius Publius Naso.)

He is frantic about Corinna’s illness.  He wants above all for her to live.  But he ends the prayer - and poem - with a gentle rebuke to Corinna.

If it is right to have warned in such great fear,
let it be enough for you to have struggled in this combat once.

The second elegy in the diptych is a furious attack on abortion. He begins with a reference to Euripides’s Medea, who said, “I would rather stand in front of the shield three times than give birth once.”  He argues that Medea’s killing her children was comprehensible ble because she wanted revenge on Jason;  but he says the tearing of an embryo from the womb is wrong, because it must naturally grow first and why deprive it of its life?

He attacks women who have abortions, saying that the first to do so should have died as a punishment. He accuses women who are exempt from military service of taking their own weapons and using them against themselves, rather than taking up those of Mars. And he argues that Corinna, the Roman population, mythological heroes, and he himself  would not have been born if their mothers had had abortions.   (N.B. He does not mention the cruel ancient practice of exposing babies, especially female babies, on a hillside.)

Gods, concede that safely she has sinned once.
and it is enough: let her bear the punishment a second time.

But which poem does Ovid mean?  The first is gentler than the second.  The points of view seem different.   The name Corinna is not mentioned in the second poem.  Only the last couplet seems to link it to the first poem.