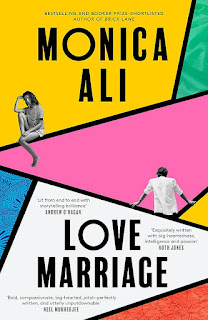 There is a joyful quality to Ali's flowing, effortless writing, and her clever twist on the Victorian marriage plot is delightful.  The comic beginning is priceless.

In the Ghorami household sex was never mentioned.  If the television was on and and a kissing-with-tongues scene threatened the chaste and cardamom-scented home, it was swiftly terminated by a flick of the box.

Sex is at the center of Love Marriage, though there is more confusion about sex than sex. The heroine, Yasmin Ghorami, a doctor in training and the dutiful daughter of Indian immigrants, doesn't quite get sex, though she is engaged to a likable doctor.  People at the hospital seem to define her in terms of race and sex, which annoys her more and more, even though her father tells her to ignore it.

Yasmin lives at home with Ma, a devout Muslim housewife, Baba (her father, a doctor), and Arif, her rebellious computer nerd brother.  The atmosphere at home is stormy, because Baba and Arif are constantly fighting.  Ma  coddles her son and persuades him not to move out, while Yasmin distracts Baba by discussing rare diseases and diagnosing hypothetical cases.  Ma and Yasmin both fall into the role of comforter and peacemaker.

Yasmin is not happy.  She has doubts about her engagement to Joe Sangster, a charming, seemingly perfect obstetrician, whom her family loves - what could be better than another doctor in the family?  But Joe's famous radical feminist mother, Harriet, is derailing Yasmin's family by talking feminist theory to Ma.  Suddenly Ma is a feminist and everything is upside-down!

And unbeknownst to Yasmin, Joe is a sex addict who has tired of dating sites and decided to start over with inexperienced Yasmin (with whom he is not particularly interested in having sex).  When he confides that he has cheated on her once (not bothering to give her the history of having had five sexual dates a day in the near past), she is hurt. And so Yasmin cheats - and discovers good sex.   And not only does she doubt Joe - she begins to doubt that she wants to be a doctor, because senseless rules in the geriatric ward interfere with care of the patients, and she is required to sign a letter of apology after a racist encounter with a visitor who wanted to talk to a "British doctor."

In the course of this surprising novel, Yasmin gets to know herself and learns the meaning of family. Perhaps some readers will mistake this novel for "women's fiction," but this gentle comedy is a polished gem. 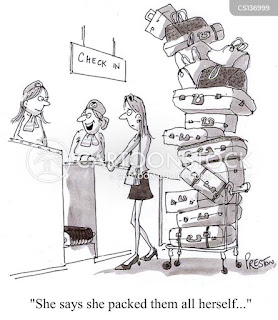 Woman goes to London - woman goes to bookstores.  Woman goes to two or three bookstores, then spends hours trying to stuff books into suitcase.  Woman puts some in a carry-on bag, which is cumbersome (and uncheckable). Woman staggers around airport with shoulder bag.  Woman encourages Husband to take both bags after they embrace at the airport.