The Neglected Novels of Maureen Howard: Grace Abounding," "Bridgeport Bus," and "The Rags of Time"


Maureen Howard is heartbreakingly pretty in the cover photo of her novel, Grace Abounding (1982).  She's in her late forties or early fifties, with elegant lines etched around her eyes, and that slightly haggard, interesting grace of a middle-aged woman.   When I read her obituary (she died on March 13 at age  91), I mourned the passing of time. She was one of the best American writers of the 20th and early 21st centuries,  though her work has fallen out of the public eye in recent years.  I have always loved her books,  and her last novel, The Rags of Time (2009), the fourth of the Four Seasons quartet, is my favorite: it is also the most challenging.

Howard was a critically acclaimed writer who won the National Critics Circle Award for her memoir, Facts of Life (1978); but her complex later novels apparently precluded popularity.  In some of them, she experiments with post-modern elements.  And her prose is glittering, sinuous, tough, and exacting - never an entirely comfortable read. 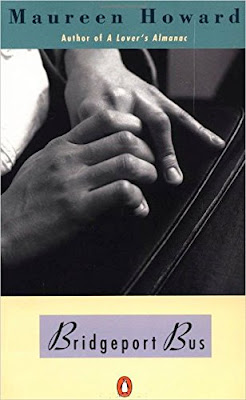 Born in 1930 in Bridgeport, Connecticut, and a graduate of Smith College, she often wrote about the working-class culture of Bridgeport.  In her second novel, Bridgeport Bus (1965), Mary Agnes Keely is a 35-year-old Catholic virgin who lives with her nagging mother in the house where she grew up.   After a hard day at work, her mother insists that Mary Agnes accompany her to a novena.

"The novena!" I gasped.  Her backside looked broader than ever as she hustled out to the kitchen. Ever since I was a girl, for over twenty years that would be, I have had to drag my mother to that novena in the winter, tugging her up the church steps like an impossible rolled mattress and stuffing her into a pew.  Then the Rosary, the Aspirations, the Benediction, the Prayer for Peace...  The whole thing started just before the war and was addressed to Our Lady of Fatima, who as I recall appeared to some prepubescent Portuguese and said the world was coming to an end - as if that were news.

Mary Agnes resents her mother, whom she has supported financially since her father's death, while  her brother got to go to college. (Mary Agnes was not the favorite child.)  All these years, she has worked at a dreary job as secretary to the president of Standard Zipper Company.  To get out of the house at night, she takes French seminars at the university. She wants to be a writer, but living with her mother makes it impossible.  And so she takes off for New York - which is  different from Bridgeport, but the experience is a bumpy ride. 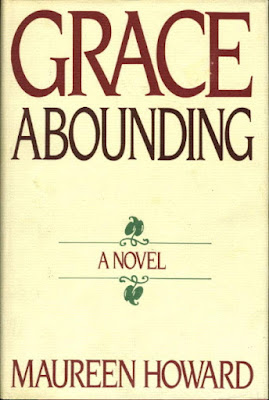 Much as I enjoyed Bridgeport Bus,  Howard really caught my attention with her brilliant novel, Grace Abounding (1982).  Her glittering, breathtaking prose is perfection. She tells the story of Maude Dowd and Elizabeth,  a mother and daughter.  Maude, a  daydreaming widow, has little to do in her charming country house, and when she is not fantasizing about sex with strangers, she spies with binoculars on the neighbors, an eccentric pair of sisters, one a poet. Maude's sullen daughter, Elizabeth, resents her fragile mother for sending her to the the public high school with the "dummies" and  scorns her mother's collection of  knickknacks. Elizabeth's lawyer father had intended to send her to boarding school, and she keeps a little shrine to him in her room.  She likes to look at his law books and his personal effects from the hospital, among them a note from a woman with whom he was having an affair.

Two things happen to awaken the mother and daughter from their malaise.  Maude finally gets laid and betrayed by a married man, the owner of a gift shop, and gives up her fantasies. She returns to school and pursues a career as a therapist of  autistic children.  And Elizabeth turns out to have a brilliant musical talent. She is, however, self-destructive, and breaks her contract with an opera company  to become a bored and angry suburban housewife.  She has married a corporate lawyer who is rarely around -  like Daddy - and takes unacceptable risks driving in storms, perhaps because of post-partum depression.  There is much in this book that will shock and challenge.  And love does not conquer all.

Howard is an outspoken, piercingly honest writer, who, rather like Mary McCarthy, speaks truths that usually go unspoken - that some may not want to hear.  In Grace Abounding, I laughed at Maude's sizzling inappropriate sexual fantasies.   (N.B. In their thirties and forties, single women do spend a lot of time fantasizing, and, as I recall, "all the men are married or gay.")  Maude finds a new life for herself through her work, as well finding an appropriate husband.  But her fantasies have to be examined with a cold eye first.

Howard’s masterpiece, The Rags of Time (2009), is an American woman’s Ulysses, and the final novel in her Four Seasons quartet. The main character is Howard's double, Mimi, an 80-year-old writer who reflects on American history, personal history, and  the design of Central Park.  She and her husband muse ironically on the new take on American holidays like Columbus Day.   Some of the chapters retell Columbus’s story: Mimi has done research on Columbus in Italy, and she quotes his journals, furious that he is being written out of American history.  In addition to writing about the lives of historical characters, Howard interweaves stories of her characters from the first three novels in the quartet.

A remarkable writer, and let's hope there will be a revival of her work.