A Row to Oneself and Perfect Plane Reading 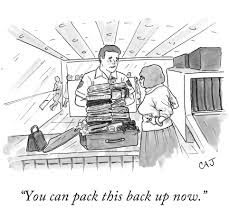 On a recent flight,  I had a whole row to myself. It was luxurious. I was not squashed against anyone, I didn't have to scooch past seatmates to go to the restroom, nobody spilled a drink on me, and I did not have to squeeze into pilates shapes so as not to overflow into the neighbor's seat.  You know the scene:  when you're napping and half leaning into the aisle, and possibly snoring, the flight attendant has to wake you so she can get by with the drinks cart - that's embarrassing.  But this time I was snugly spread out across a row.  And  I had three blankets - I'm always cold on the plane - and three pillows, which I attempted to place strategically under the back and shoulder, though the pillows were too firm to help much. 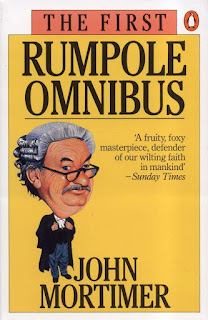 When you have an entire row, you can get some reading done.  I read the very funny The Trials of Rumpole, one of John Mortimer's many collections of stories about the eccentric barrister's defenses of his lower-class clients, as well as a few glimpses of his domestic life with his wife, She-Who-Must-Be-Obeyed (named after H. Ryder Haggard's sorceress in She).  The Rumpole books are light, witty, perfect plane reading.

And then I turned to Charlotte Mendelson's riveting novel, The Exhibitionist, which is longlisted for this year's Women's Prize. Don't worry that it didn't make the shortlist:  the great thing about these prize lists is the longlist, which often introduces me to great  books.

The Exhibitionist is a dark comic novel about an unbalanced artistic family, dominated by the flamboyant Ray Hanrahan, a once famous artist.  Don't think this family is lovable:  their household is hell. It isn't immediately apparent to outsiders, but we see it from inside out. 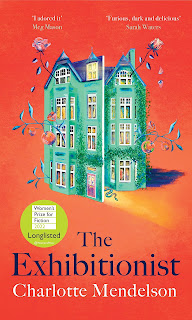 The focal point is Ray's first art exhibition in decades.  It is all very hush-hush: no one has seen his work, except his acolyte, his beautiful daughter, Leah, who has sacrificed her youth to support him - even to the point of visiting a drug dealer late at night to score the Oxycodone Ray cannot live without.   The drugs enhance Ray's personal chaos:  he is charming and funny, mad and cruel.  And Leah is the only one who can cope with his moods.

The Hanrahans live in an enormous crumbling house in London: the youngest daughter, Jess, the only one who has gotten away, thinks the whole thing should be knocked down.  Ray is a hoarder, and no one is allowed to disturb his stacks of magazines and various other collections: he is even proud of the mossy organic growth in the basement.

And Ray's nervous wife, Lucia, who is more or less the protagonist- God knows she doesn't want that role - tries to stay in the background and underplay the fact that she is the famous artist in the family, because it drives Ray to mad accusations.  At her studio Lucia avoids answering the phone (Ray likes to check up on her), and she even ignores calls from  her supportive agent, who phones on the eve of Ray's exhibition to break the news that Lucia has won a major art prize in Vienna.   Lucia murmurs that she can't accept - of course because of Ray - but the agent is made of sterner stuff.

Lucia is so jittery it is almost unbearable to the reader:  Lucia expects every minute to be punished by Ray for her success.  She also has suffered extreme physical and psychological pain from breast cancer and a poorly-constructed breast shape made from her body tissue.  I felt so sympathetic to Lucia that I had to put the book aside at times.

Lucia reproaches herself for weakness. She  knows the three adult children are damaged because because she never stood up to Ray.  Self-conscious Jess, their youngest daughter, is a teacher in Edinburgh, stuck in a relationship with a closeted gay man (she doesn't know he is gay, but can't bear to hurt him, and he refuses to break up).  She returns home for Ray's exhibition at Leah's insistence:  Leah says Jess has already let Ray down by leaving home and she must be here now to support Ray.  But Jess doesn't take this seriously:  she knows Ray's egotism, and this is just a gesture.  Ray has never paid attention to her.

And there is another sad character, Patrick, Lucia's son and Ray's stepson.  Remember Hareton in Wuthering Heights?  The boy who was so denigrated by Heathcliff he did not even learn  to read, because Heathcliff wanted to get even with Hareton's (now dead) father, Hindley?  Well, that's Patrick, a nervous, sweet, possibly autistic young man who gave up his dream of being a chef because Ray disapproved vociferously and abusively.  Patrick is a sweet nervous wreck who lives in a caravan in the yard and makes a living as a handyman.  Ray is brutal when Patrick tells him before the exhibition that he has been offered a good job as a cook.

I won't pretend this book isn't harrowing.  It is. Some of the reviewers think it is a comedy, but I don't quite see it that way.   There is some hope.  Lucia has an affair with Priya, a charming, fascinating MP, though Priya, too, is married, and has made it clear there is no future for a serious relationship. Yet Lucia now realizes her art has meaning.  And her children, too, are finding second chances.  Life will never be perfect, but there it is.

HOW TO BECOME AN AMERICAN SECURITY RISK

Airlines allow you to take only tiny bottles of "liquids" in case someone  uses alchemy to turn them into weapons of mass destruction.  This time I stowed my tubes of prescription skin cream in my bag, because I could not figure out how to squeeze them into the tiny bottles, and honest to God, my hands bleed without this cream.

Suddenly, I was being PATTED DOWN by a security woman.

"Why am I being frisked?"  I asked repeatedly.

She did not answer.

Then a man behind the conveyor belt triumphantly opened a zipper compartment in my rather confusing carry-on bag (bought on sale).  He discovered my tubes of skin cream.

He immediately lost interest.  The woman drifted away.

And so I sat down on a bench, thinking it was early in the morning to be groped by strangers, and tied my shoes and gathered up my things.