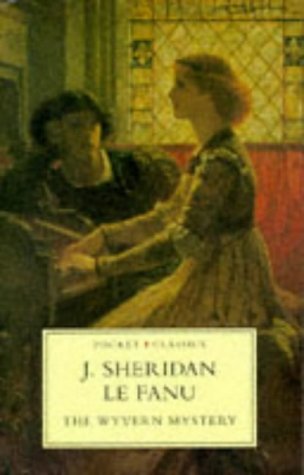 I had high hopes of J. Sheridan Le Fanu's The Wyvern Mystery because I loved The Rose and the Key.   The Wyvern Mystery  disappoints:  it is readable but messy.  Yet I was fascinated by the Gothic tropes and an allusion to Bertha, the mad wife in the attic in Charlotte Bronte's Jane Eyre.  In Le Fanu's novel, Bertha is the mad, homicidal ex-mistress of Charles.  In addition to sharing Bronte's mad wife's unattractive personality, Le Fanu's Bertha is old and blind.

The book lacks a real protagonist.  The most memorable character is Mildred Tarnley, the gloomy, elderly housekeeper who has always lived at the Grange.  But the action revolves around gentle Alice Maybell, who was adopted as a baby by Old Squire Fairfield after he hounded her widowed father, a timid vicar, to death over real estate.  And  Alice, who has grown up to be a pretty woman, unwittingly attracts the attentions of "the  gaunt old squire" in his seventies.  He has descended into dementia and is determined to marry her.

Le Fanu's wordy dialogue is not even faintly realistic, yet it is dynamic. In a horrific scene, "the gaunt old Squire"  pesters Alice to accept his proposal of marriage.  Certainly this is incestuous, as well as mad, and Alice is appalled.

The old Squire speaks in dialect, ponderous with "ye"s.

Alice and her lover, Charles, the squire's oldest son, elope to live in poverty at the Grange, a run-down, reputedly haunted house owned by the Fairfields.  The housekeeper Mildred informs the new mistress of the dark history of the house and its ghosts.  At first she seems to dislike Alice, but that is because of her long history with the family and the house.

There are mysterious doings at the Grange. Alice is not allowed to leave, even to shop in the nearby village, because Charles is afraid of debtors, or so he says.  And his smarter younger brother, Harry, is contemplating a double-cross in his dealings with a character he calls "the Old Soldier," who it seems is blackmailing Charles.

As I have indicated, the traditionally minor characters upstage the Fairfields.   Though Mildred Tarnley bends the rules, she is torn between the family and its usurpers.

The Wyvern Mystery is a very fast read,  but it not for everybody.  If you like Gothic novels, however,  add it to the list.