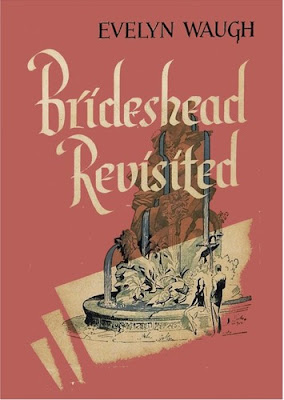 Evelyn Waugh was a brilliant satirist:  my favorites are A Handful Of Dust, Scoop, The Ordeal of Gilbert Pinfold, and Vile Bodies. But I actually prefer his realistic novel, Brideshead Revisited, which was a popular, if not a critical, success in 1945.  Critics disparaged the overblown style, but readers were besotted. And I love Waugh's extravagant, lyrical language, the comic scenes at Oxford, the charming, deftly-etched characters, the witty dialogue, and the narrator's romance with a country house, Brideshead. 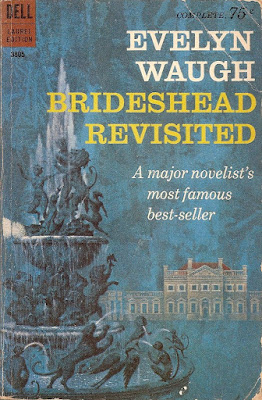 The prologue opens in the 1940s, during World War II. Charles Ryder, the narrator, is an army captain stationed in England. His company hoped they would be transferred to the Middle East, but they end up at Brideshead, an English country house. And it evokes melancholy memories.

Charles's days at Brideshead shaped his art and career.  His  friend, Sebastian Flyte, introduced him to art and architecture there.  In civilian life,  Charles became a successful architectural painter.  But in his thirties, he could not break away from his traditional style.  A trip to South America did not revitalize his art:  the critics, nevertheless, like it.  Charles is depressed and denigrates himself. And clearly the critics do not convince him.

This beautifully-written novel is a wistful comedy, but it is also a lyrical examination of the pre-war past. In Book I, Charles relates the story of his joyful (platonic?) relationship  with Sebastian Flyte, whom he meets at Oxford in the 1920s.  After Sebastian drunkenly wavers across the lawn and leans over the windowsill of Charles's room to vomit, Charles and his scout, who must clean it up, are annoyed.  But Sebastian apologizes by sending Charles all the flowers in a flower shop.  Everyone forgives Sebastian:  he is irresistible.  He comically carries a teddy bear, drinks champagne, invites Charles to a romantic picnic where they eat the first strawberries, and then to  Brideshead while his family is away. 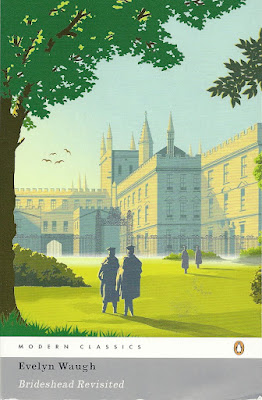 But the Catholicism of his mother, Lady Marchmain, drives Sebastian to drink, though Sebastian is also devout.  The  Jesuitical Lady Marchmain sets spies on him to monitor his drinking, which complicates the problem.  Finally Sebastian Flyte "flies" from the Oxford professor (or lecturer?) who accompanies him on a trip to the continent:  he disappears in Morocco, where he lives with a German named Kurt, whom Sebastian loves, as he  points out, because he can take care of him.

In Book II, Charles falls in love with Julia Flyte, who looks exactly like her brother.  This is Charles's "mature" love:  the mistress of Sebastian's father once told Charles that Englishmen's "romantic friendships"  were an interlude.  We wonder: Which is the real love, which is the interlude? Julia, a lapsed Catholic in a loveless marriage, has much in common with Charles, who is also unhappily married.  Her materialistic, doltish Canadian husband could not convince the priest he was fit to convert before their marriage. Julia,\ dropped her religion and had an affair.  And Charles no longer loves his charming, ambitious wife, a friend of Julia's, who also once had an affair.    Charles and Julia have an idyllic interlude - perhaps deeper than the idyll with Sebastian. And there seem to be no obstacles to divorcing their spouses and getting married - at first.

The book is partly a subtle meditation on the dilemma of Catholics in the changing moral landscape of 20th-century England.  And Charles's tragedy is to take himself too seriously. Waugh, a Catholic convert, captures the appeal and pain of the religion.  But this book is beloved for its charm, beauty, and comedy.