When We Used to Read Literary Magazines 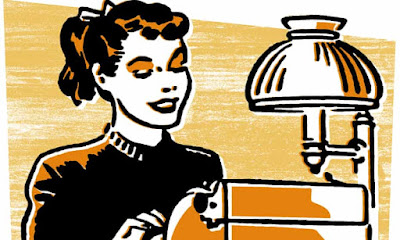 When I grew up (I must have been at least 29),  I hoped to get a literary job, though in my circles this meant PR or writing for a small-town paper.  In our town you either became that cynical reporter who believed the worst of everybody, or that desperately perky PR flack who guzzled Lemon Lavender tea while writing annual reports.  Neither line truly appealed to me, but eventually I got a job that combined the two.   I showed up at the office early  (so I could leave early) in whatever crumpled knit dress or billowing rayon pants that caught my fancy; my hair was always freshly washed and wet from the shower.  Because why blow-dry and style your hair if you're just going to the office?

My kind-hearted boss hinted I wasn't going to get a promotion if I didn't blow-dry my hair, but I didn't actually want a promotion.  Jobs of this sort were temporary, to my mind.  Eventually I would write a novel or something. The great thing about office life:  after we finished our work, we could read magazines.  In fact, we were encouraged to read magazines for work.   We'd pick up stray gossip at Vogue, learn about current events from Time, delve into politics at The Nation, and glean a little history from The Smithsonian.

Best of all, we got to read expensive little magazines: The Paris Review, Dissent, Tin House, Commentary, The San Francisco Review of Books, The North American Review, The Alaska Quarterly - whatever the corner bookstore had.   By the way, publishing something in a little magazine is the ultimate non-job:  you are paid in copies.

Little magazines are in trouble financially nowadays.  Some of my favorites have closed.  And I just read an article at CNN about the ways in which they are floundering and  folding.  The Believer has gone out-of-business - I thought that was an institution - and colleges and universities are struggling to fund their little magazines. Actually, some universities are not struggling to fund them:  they've cruelly cut them altogether.

... in the world of literary arts, they're essential. For early-career poets, essayists and fiction writers, these magazines are a way to get published, find an agent and get paid. They serve as a stepping stone -- no one, after all, just jumps into a book deal. Credits through literary magazines present a pathway.

....It's not just about career building, though. The magazines are a runway, where new literary styles are tested and emerge. New voices break through. If only large, established magazines continue to exist -- like The Paris Review or the New Yorker -- the diversity of the literary world will suffer, as Alaska Quarterly Review co-founder and editor-in-chief Ronald Spatz told CNN.

Literary magazines are a luxury, and I confess I do not subscribe these days. I shall have to remedy that, or at least ask the library to subscribe.  In little magazines, you have the opportunity to read writers you've never heard of, and may never hear of again, as well as the famous writers who draw readers.  The message from the all-powerful publishing moguls and university trustees is clear:  nonfiction matters little, literature less.  Print newspapers and mainstream magazines are also struggling, switching from paper to electronic, where we know in advance they won't survive.

How will we get by when we're left with Twitter and Instagram?  The mind boggles.  There is much to admire on the internet, but much to lament.