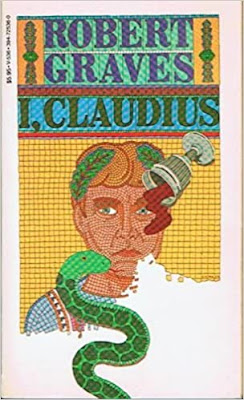 I used to be bored by historical novels.  My experience of the genre consisted of plowing through Peter Carey's long-winded The True History of the Kelly Gang (a Booker Prize winner) and skimming Jean Plaidy's light novels about Tudor queens.

Then I discovered historical novels set in ancient Greece and Rome; my favorite subset focuses on Roman emperors.  The odd thing is that, with the exception of I, Claudius, I did not read historical novels when I was immersed in classical studies. My emphasis was on Latin literature, and what I knew of general Roman history came from primary sources, like Suetonius's gossipy De Vita Caesarum (The Twelve Caesars).  It was not until my classical afterlife that I found leisure for modern histories and historical novels.

Most historical novelists do a mad amount of research, keep up with the latest versions of history, and have fascinating takes on the emperors. Some are portrayed as able politicians, others incompetent, still others competent but corrupt, the majority vicious, and many completely mad.

There is, improbably, something cozy about books about such improbable humans and such a very distant, different way of life.  Here is a short list of historical novels about Roman emperors. Enjoy! 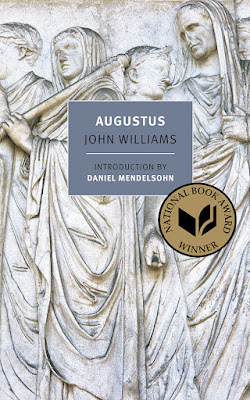 1.  Augustus, by John Williams.  Best-known for Stoner, a tepid imitation of the lesser work of Willa Cather, Williams is more sophisticated in the execution of his classic novel, Augustus, which won the National Book Award in 1973. Centered on the life of Octavian, the first Roman emperor, later known as Augustus, it unfolds in the form of pitch-perfect letters, documents, memoirs, and journals.

2.   Robert Graves's  I, Claudius is based on Suetonius's The Twelve Caesars, which Graves knew well:  he translated it from Latin into English.   I, Claudius is a fictitious autobiography, which describes the early years of the crippled, stuttering, catarrh-ridden future emperor.  Claudius was underestimated - considered stupid because of his stutter - and that helped him survive the perils of the reigns of Augustus, Tiberius, and Caligula.  After his nephew Caligula was murdered, Claudius reluctantly succeeded to emperor.  In the sequel, Claudius the God, Graves continues the story of Claudius as bureaucrat-emperor.

3.  Valerio Massimo Manfredi's The Ides of March (Europa). I enjoyed this exciting Italian novel, which is billed as a “political thriller set during the tempestuous final days of Julius Caesar’s Imperial Rome.”  A treat for the Ides of March (March 15).

4.  Thornton Wilder's The Ides of March, a Pulitzer Prize-winning  epistolary novel about Caesar's Rome, struck me as rather dry, but it is certainly worth reading.

5.  Margaret Yourcenar's Memoirs of Hadrian.  A meditative French classic about the emperor Hadrian. From the book description: "Marguerite Yourcenar reimagines the Emperor Hadrian's arduous boyhood, his triumphs and reversals, and finally, as emperor, his gradual reordering of a war-torn world, writing with the imaginative insight of a great writer of the twentieth century while crafting a prose style as elegant and precise as those of the Latin stylists of Hadrian's own era."

6.  Margaret George's The Confessions of Young Nero and The Splendor Before the Dark.  In these two novels, the popular writer George portrays Nero as a sympathetic character. In the afterword of Confessions she says she wrote it to restore his reputation. Her bibliography is long and impressive.  And this reinterpretation of Nero's character seems to be a trend:  Last year The New Yorker (June 14, 2021) published Rebecca Mead's essay,  “How Nasty Was Nero?” about an  exhibition on Nero at the British Museum.  The curator refutes the monstrous image of Nero.

7,  Allan Massie, who wrote an excellent book column for The Spectator, has written many historical novels, including  a series about Roman emperors:  Caesar, Augustus, Tiberius, and Caligula. They are all on my TBR.

8.  Gore Vidal's Julian.    This brilliant novel is written in the form of a memoir of Julian the Apostate, the fourth-century Roman emperor who set out to bring back the Hellenistic gods and stop Christianity without persecuting Christians. Julian was a philosopher and essayist who also saw his share of wars.  Vidal's novel is stunning.  I can't call him underrated, because he was a popular and critically-acclaimed writer, but perhaps he has been neglected since his death.

Any recommendations of favorite historical novels set in your favorite period?