Is Natsume Soseki the Japanese Colette? 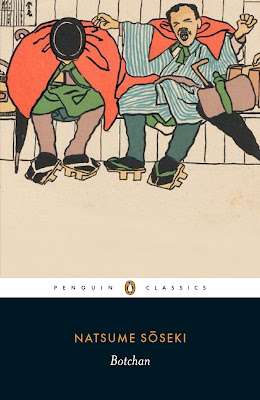 Yes, I know, you think I am hallucinating, but there are resemblances between the elegant Japanese writer,  Natsume Soseki (1867-1916) and the lyrical French writer, Colette (1873-1954).

As I read Soseki's comic novel, Botchan,  I was reminded of Colette's four Claudine books:  Claudine at School, Claudine in Paris, Claudine Married, and Claudine and Annie.  Both writers paint vivid portraits of rebellious characters coming of age.  Natsume Soseki, one of Japan's greatest modern writers, himself a teacher-turned-writer, relates the exploits of a hot-headed math teacher who reluctantly leaves Tokyo to take a job in the provinces.  Colette, the most famous French woman writer of her day, explored Claudine's metamorphosis from saucy, wild student at a provincial school into a depressed girl who followed her entomologist father to Paris and then became an unhappy wife and finally an independent woman.  Different characters, different experiences, and Colette devoted more space to Claudine, yet there's a kinship in style and substance between the writers:  spare, graceful, witty writing and unforgettable characterization.

In Claudine at School,  the impulsive Claudine misbehaves at a provincial school, fighting a subtle war against two lesbian teachers who dislike her.  If Claudine had been male, she might have been like Botchan, a young man of no particular accomplishments who accepts a teaching job in a provincial town because he has nothing else lined up after he graduates.  Botchan fightw with students and teachers alike.  He can't wait to go back to Tokyo, where, in his view, there are fewer intrigues.

J. Cohn's translation of Botchan is slangy and entertaining, and though it lacks the elegance of other novels I've read by Soseki, it is very clever and a work of comic genius.  Botchan's absolute honesty and sense of honor are endearing.  He is not at all academic, and wonders if he should return his diploma.  Later, he tries to give his teaching certificate back to the principal. His musings on his self-declared mediocrity are hilarious.

For three years I studied about as hard as everybody else, but I wasn't particularly good at it and if you looked for my name in the class rankings you would have had an easier time finding it if you started from the bottom.  Still, incredible as it seemed, when the three years were up I managed to graduate.  I couldn't help thinking that it was kind of odd, but since it wouldn't make any sense to lodge a complaint, I accepted the diploma without protest.

Botchan has no vocation, and has taken the job only because he needs money. He has discipline problems, because he is only a few years older than his students.  After the boys see him gorging on buckwheat noodles and tempura at a noodle cafe, they start a hazing campaign.  And no one helps the inexperienced teacher:  it is as though the hazing comes from all sides.

The next day I walked into my classroom just as I would any other day, only to find someone had written MISTER TEMPURA in  giant letters on the blackboard.  As soon as the students saw me they burst into raucous laughter....  I asked them what was so funny about tempura.  One of them answered:  "But four bowls is too much, na moshi."  I told them that as long as I paid for them and I ate them, it wasn't any of their business if I ate four, five, or any other number I wanted."

I loved Botchan, only 144 pages in the Penguin, and I recommend it if you're looking for a laugh.