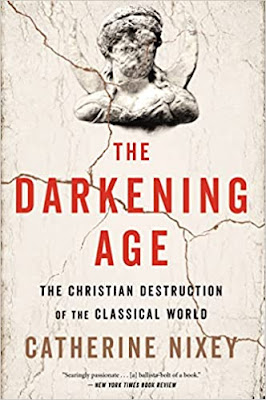 Catherine Nixey's history of the rise of Christianity and the conquest of the West is a clear, compelling, and lively book.  For anyone who is curious about the transition of Paganism to Christianity in the Roman empire, her book The Darkening Age:  The Christian Destruction of the Classical World is a brilliant, if controversial, analysis of religious clashes in the ancient world.

For my purposes, I will focus not on Nixey's account of the struggle between the two religions or the question of who persecuted whom, but on the widespread obliteration of Greek and Roman books as Christians began to dominate the West.   I was aware that the art and statues of Rome and Greece were looted and mutilated, that the Library of Alexandria was burned down in 391 A.D, and that the majority of classical literature was"lost," but I did not realize it was Christian policy to destroy all traces of Paganism.

Perhaps it was  my religious upbringing, but I had a mental picture of vague, well-meaning, incompetent Disney-cartoon monks blundering as they absent-mindedly copied scrolls and accidentally discarded the important ones.  ("Whoops!  Was I supposed to save that?")  Anyone who has worked in an office - or even watched The Office - will have an inkling of the listless ineptitude that dominates the culture of the workplace.  Scribes made extraordinary errors that rendered occasional sentences and whole passages in Greek or Latin literature nonsense.  Scholars still write commentaries on the texts, but sometimes wave us on with the acknowledgement that the abstruse garble is beyond emendation.

According to Nixey, the destruction of classical literature was  political and purposeful.   The Christian bishops and authorities practiced censorship and were determined to wipe out the influence of Paganism.  They ordered Christians to tear down shrines and temples, even to the point of removing roof tiles, and to make bonfires of pagan books.

An accusation of "magic" was frequently the prelude to a spate of burnings.  In Beirut, at the turn of the sixth century, a bishop ordered Christians, in the company of civil servants, to examine the books of those suspected of this.  Searches were made, books were seized from suspects and then brought to the center of the city and placed in a pyre.  A crowd was ordered to come and watch as the Christians lit this bonfire in front of the church of the Virgin Mary.  The demonic deceptions and "barbarous and atheistic arrogance" of these books were condemned as "everybody" watched "the magic books and the demonic signs burn."

With the rise of Christianity, literacy rates dropped and the public libraries were closed.   Politically, it did not make sense for the bishops to let Christians read. In the third century,  there were 28 public libraries in Rome and many private libraries, but in the fourth century the libraries had vanished, according to the historian Ammianus Marcellinus, who said they were "like tombs, permanently shut."

Nixey has a unique background:  the daughter of a former nun and a former monk, she was raised Catholic, studied classics at Cambridge, taught classics,  and became a journalist. Whether or not you agree with her conclusions, her research is impressive.

I would say book burnings can't happen here, but there is always talk about banning books. So far, America has survived influenza, the McCarthy era, the mini-skirt, Billy beer, witchcraft, the Moonies, padded shoulders, Contragate, heavy metal bands,  the marketing of E. L. James's S/M romances, Dancing with the Stars,  election recounts, the Kardashians, and the retraction of books by publishers intimidated by, of all people, the new censorious left-wingers - but thank God the libraries and bookstores have reopened during the pandemic.