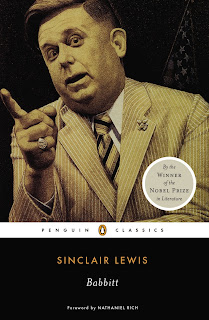 This year is the 100th anniversary of the publication of Sinclair Lewis's satiric classic, Babbitt.

We have always been fans of Sinclair Lewis, who won the Pulitzer Prize for Arrowsmith (1925) and was the first American writer to win the Nobel Prize (1930).   Raised in the small town of Sauk Centre, Minnesota, Lewis moved east at the first opportunity.  Though he graduated from Yale and worked as a writer, editor, and publicity agent in New York, he never got over his contempt for Sauk Centre.  In novel after novel, he satirized the rigid conformity and mores of small towns and cities in the midwest.

On this rereading of Babbitt, we admired Lewis's colloquial writing and the clever structure of the book - the first 100 pages  take us through a day in the life of George Babbitt.  George is a successful realtor, a tireless booster, and a hearty member of the Elks, the Rotary Club, the Moose, and the Athletic Club.  He has the accoutrements of middle-class life -  a new house, a motor-car, a wife, children, and vacations in Maine - and yet he has lost his way.

George is in full midlife-crisis mode: he is  bored by the office and the daily lunches at the club. Family life is also unfulfilling:  his "dumpy" wife, Myra, is preoccupied with domestic culture, his teenage son is rebellious, and his daughter,  a graduate of Bryn Mawr, has disconcerting liberal ideas. Without his sensitive best friend Paul, with whom George does not have to pretend to be full of "pep," he couldn't bear his life.  But Paul, who has a mistress in Chicago, goes off the rails - he shoots his wife, Zilla, and though she survives and all agree Paul was temporarily insane, he is sentenced to two years in prison.

This is unbearable for Babbitt.  Like Paul, George goes off the rails.  He has many regrets:  he wishes he had gone to law school, but his wife Myra announced they were engaged after a make-out session, and he ended up in business with her father.  (At least this is the way Babbitt sees it.) He and Paul once spent a week in Maine by themselves to get away from their families, but now Babbitt is on his own.

Babbitt is the archetype of an average businessman, suddenly searching for meaning.  He tries to expand his consciousness when he falls prey to a thirtysomething siren who introduces him to books (which he does not read) and leftist ideas.  And so he wonders when his friends mock The Inferno,  should he have read Dante?

As I read this, I thought of John Updike's Rabbit books.  Rabbit rhymes with Babbitt, and Updike was one of the best-read critics of the 20th century.  Updike chronicles Rabbit's reluctant passage from rebel to family man and owner of a car dealership, while Lewis's Babbitt regresses from staid businessman to hard-drinking member of one of Zenith's youngish bohemian circles.  And vey uncomfortable Babbitt finds it.

Culture is unknown to George's business friends.  Let me quote Babbitt's friend Vergil Gunch's hilarious words on Dante.  "I suppose Dante showed a lot of speed for an old-timer - not that I've actually read him, of course - but to come right down to hard facts, he wouldn't stand one-two-three if he had to buckle down to practical literature and turn out a poem for the newspaper-syndicate every day,  like Chum does."

And here is Babbitt's explanation to his son why he has to read Shakespeare in school.

"I'll tell you why you have to study Shakespeare and those.  It's because they're required for college entrance, and that's all there is to it!  Personally, I don't see myself why they stuck 'em into an up-to-date high-school system like we have in this state.  Be a good deal better if you took Business English, and learned how to write an ad, or letters that would pull. But there it is, and there's no talk, argument, or discussion about it!  Trouble with you, Ted, is you always want to do something different!  If you're going to law-school - and you are! - I never had a chance to, but I'll see that you do - why, you'll want to lay in all the English and Latin you can get."

Babbitt is briefly the Dante of Zenith, a man who as lost his way in the middle of his life.  He  denounces middle-class values and says the liberals are not bad guys, and alienates his business friends.  But he is ultimately bound to right-wing Republicanism, and appreciates family life after a few months of hard partying.  This stunning book, written in the most effective of colloquial language, shows us the depths of George F. Babbitt's muddled humanity.

Email ThisBlogThis!Share to TwitterShare to FacebookShare to Pinterest
Labels: Babbitt