Life on the Surface: "Mrs. Bridge," by Evan S. Connell 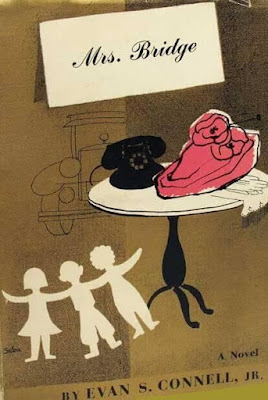 Evan S. Connell's best-selling novel, Mrs. Bridge, set in the 1930s and published in 1959, is back in fashion.  Suddenly in the 21st century, people are reading it again. It began in 2018 when The New York Times published an essay about this quiet novel. Last year, Ploughshares published an essay on the power of the vignette in Mrs. Bridge.  Most recently the book popped up on Michael Dirda's Desert Island list.

Some years ago I enjoyed Mrs. Bridge, so I decided to take a second look. The novel is very short:  a concise, understated, lyrical account of the life of Mrs. Bridge, a housewife in Kansas City.   Her husband is an affluent workaholic lawyer, too tired to have sex because he works late. Raising their three children, Ruth, Caroline, and Douglas, is Mrs. Bridge's occupation. Beyond this, she does not know what to do with herself, except attend card parties and lectures. On page 2, Connell informs us: "She was not certain what she wanted from life, or what to expect from it, for she had seen so little of it, but she was sure that in some way - because she willed it to be so - her wants and her expectations were the same."

The unostentatious structure underscores her limits and non-linear consciousness. The novel unfolds in vignettes, quotes from the society column of The Tattler, scenes from Mrs. Bridge's social life, and occasional flashes of introspection.

Mrs. Bridge is not a questioning Nora of A Doll's House, but she is charitable and sets a good example to her children.  Every Christmas, she "adopts" a poor family in the city and she and the children take them a gift basket.  Think of Mrs. March and her daughters visiting the Hummels on Christmas.  But while the March sisters are humbled and feel compassion, Douglas Bridge is traumatized.  He chooses to stay in the car, and is horrified when poor people reach in to touch the upholstery.

There are a few realistic "bad mother" scenes:  clearly Mrs. Bridge does what she sees as right, though the reader may see it differently.  She alienates Ruth, who dresses artistically, stays out late with men, and does not give a damn what her parents say.  A failure at school, Ruth succeeds in New York as an assistant editor at a fashion magazine.   Caroline is conventional and fond of her mother, but at college she falls in love, and the marriage is disastrous.  Mrs. Bridge is on a '50s Freudian-ish path to emasculate Douglas.  Her creative son uses geometry to design and build a tower in the vacant lot out of trash  - and it is indestructible, because of its concrete base.  Mr. Bridge sees no harm, but Mrs. Bridge is embarrassed by Douglas's difference from others.  She  calls the fire department to complain and they destroy it. That way, she thinks, Douglas won't hold her culpable. She underestimates him:  he goes on to other projects.

As for Mr. Bridge, what I call "the tornado scene" illustrates his essential coldness.  One night at the country club, they are eating dinner when the waiter enters the dining room to say there is a tornado warning and invite them to the basement.  Mr. Bridge declines to leave because he wants to eat his steak.  Mrs. Bridge is embarrassed but stays in the dining room with her husband.  (I beg you, Mrs. Bridge, go, go, go!) She is terrified, but sits at the table.  And the tornado doesn't strike, so they are in luck.  And perhaps she is terrified of Mr. Bridge?

Connell's writing is spare and poetic, almost a prose poem.  But I did not admire this novel uncritically.  It's a bit like the Stoner revival a few years ago. I enjoyed John Williams's Stoner, but did not consider it a great book.  (I much prefer his historical novel, Augustus, which won the National Book Award.) As for Mrs. Bridge, the writing is beautiful, yet I was impatient with the characters this time round.  Mrs. Bridge's only rebellious friend, the well-educated Grace Banner, unexpectedly commits suicide.  Now why did Connell kill off the only nonconformist housewife in the novel?  It seemed a little... well, dare I say misogynist?  I was shocked and depressed.

Connell aptly sketches the superficiality of characters in the country club set in Kansas City, his hometown. We have all met these people.  They are the same everywhere.   But I wonder:  isn't there a spark in Mrs. Bridge? Didn't Grace kindle that spark at times?  Perhaps I have become more  hopeful over the years.  There are many superficial people - and perhaps not enough Graces to make a difference.

By the way, there is a sequel, Mr. Bridge, which I also enjoyed .  It is on the rereading TBR.