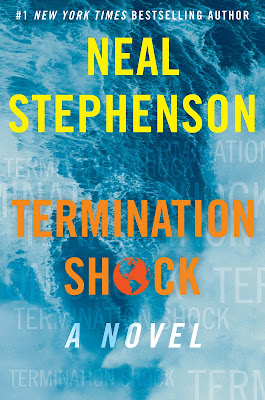 I picked up Neal Stephenson's new techno-thriller, Terminal Shock, because I wanted to lose myself in a page-turner. If you are fans of eco-fiction, such as Richard Powers's The Overstory or Kim Stanley Robinson's The Ministry for the Future, you will enjoy this genre-bending political novel about reversing global warming.

Set in the near future (circa 2030), it centers on the scheme of an eccentric Texas billionaire, T. R. Schmidt, Ph.D., to  reverse global warming with a gigantic rocket-gun that shoots sulfur into the air.  The technology is inspired by the 1991 eruption of the volcano Mount Pinatubo, which temporarily cooled the earth's temperatures because of sulfur emitted by the volcano.

And so Schmidt throws an exclusive party for powerful guests whose countries are suffering from global warming and rising sea levels.  Among them are Saskia, the endearing down-to-earth queen of the Netherlands; her new friend Rufus, a Comanche hunter of wild boars who literally collides with Saskia on the airstrip of the Waco airport while hunting the wild pig that killed and ate his daughter; Saskia's savvy chief political advisor, Willem, a gay man from Papua; three glamorous but slightly sinister Venetian aristocrats; and the Mayor of the City of London and his Indian journalist wife.

Everyone is impressed by the tour of Schmidt's Flying Ranch, where they learn about the tech and see the giant gun.  But is it too soon to use it? Not in Schmidt's view:  it goes into operation right after the party disperses.  Texas is more or less its own country, and the U.S. government does not interfere.   The sulfur in the air will benefit much of the world, but will be disastrous for India, whose monsoons may be affected.

Stephenson's style is unobtrusive.   He writes intelligently but simply, in a style reminiscent of Upton Sinclair's plain, impeccable prose in the political Lanny Budd series. Like Sinclair, Stephenson depends to a great extent on political exegesis in dialogue.

Parts are talky, but there is plenty of action. There are two climate disasters in the Netherlands and one in London; we also spend a lot of time with an Indian-Canadian who practices a rare martial art in India.  The slightly sinister Venetians go rogue with their own gun, India forms a geoengineering resistance movement, and  China schemes to acquire the tech for nefarious purposes.

By the way, I'm not a science geek, but I pored over the diagrams on the endpages:  they minutely depict T. R. Schmidt's launch facility on the Flying Ranch and the workings of the gun.

After I catch my breath, I must read another book by Stephenson.  Any recommendations?