An Academic Satire: Pamela Hansford Johnson's "Night and Silence Who Is Here?" 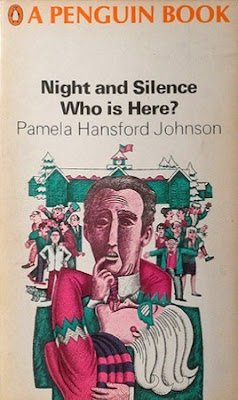 I am fond of academics.  In the late twentieth century, professorial friends slung quotations back and forth at the pub -  lines from Horace's drinking poems, Juvenal's satires, and once, inexplicably, from Caesar's Gallic Wars.  Amazed, I wondered if I would ever feel called upon to declaim.  Verdict:  unlikely.

Much as I admire impromptu quotations and recitations, I am a great fan of academic satires.  Everyone enjoys Kingsley Amis's Lucky Jim and Mary McCarthy's The Groves of Academe, because they reveal the farcical side of university life.

One of my favorites is Pamela Hanford Johnson's forgotten 1963 novel,  Night and Silence Who Is Here?  Johnson, a  respected writer of the twentieth century, the author of 25 novels, two plays, and a book on Proust, is neglected and underrated, despite the fact that she was the subject of two recent biographies.  The novel Night and Silence Who Is Here? is the middle book of her Dorothy Merlin trilogy. Each of these three books centers on a writer:  in The Incredible Skipton it is a novelist, in Night and Silence a critic, and in Cork Street, Next to the Hatter's, the poet Dorothy Merlin herself.

Night and Silence is a feather-light but clever entertainment.  Matthew Pryor, a wealthy middle-aged English bachelor, accepts an invitation to spend a semester as a Visiting Fellow at an American college.  He is an expert on the poetry of his friend Dorothy Merlin, solely because she badgered him to write a few articles.  "Since he mildly liked her work, he saw no reason not to; and as her total oeuvre consisted of twenty shortish poems and four slim verse-dramas, the labour was not demanding."

Matthew looks forward to being cosseted and coddled at Cobb College, but it is an inhospitable place:  at his boss's house, he is offered a glass of ice-water.  He spends much of his time foraging for food, because there are no stores in the hamlet, and the nearest town is 20 miles away.   (Matthew doesn't drive. ) He struggles to boil an egg - he wonders why there are no egg cups - and weeps when he realizes there is no servant to clean up after him.  His two English colleagues, Edith Corall and Miss Groby, are equally discouraged.  Miss Groby has given up eating altogether and taken to drink, while Edith is as helpless in the kitchen as Matthew.  Matthew spends his money on taxis so he can shop and go to restaurants in town. He scavenges breakfast and lunch at the student cafeteria.

Readers will guess that Matthew's scholarship does not flourish in this chilly atmosphere.  He does not want to be a scholar; he wants to be thought to be a scholar.  In fact, Dorthy's poetry looks more and more ridiculous now that he is at Cobb. And he has no social life to take his mind off his negligence.  The other Visiting Fellows are uncongenial - two engage in an internecine quarrel after the cat piddles on some papers.  And the tenured faculty ignore the Fellows.

The most gregarious character is Dr. Ruddock, who is very funny in an irritating way.   He is writing a book to prove that Emily Dickinson was a drunkard, and quotes her poems to back up his theory.  This is so silly, so apt a satire of the most desperate and weakest scholarship, that we have to say, Right on, Pamela!

There are many intrigues, misunderstanding, and blunders - and tropes blatantly borrowed from Lucky Jim.  Matthew may not be as engaging as Lucky Jim, but his experiences in New Hampshire are equally comical.  Perhaps Johnson and her husband C. P. Snow felt this way after their visits to American colleges. (I no longer have the biographies of Johnson, but I vaguely remember they visited some American colleges in some capacity - to lecture?)

This book is very slight - far from Johnson's best - but it is an enjoyable fast read.

Email ThisBlogThis!Share to TwitterShare to FacebookShare to Pinterest
Labels: Night and Silence Who Is Here?, Pamela Hansford Johnson