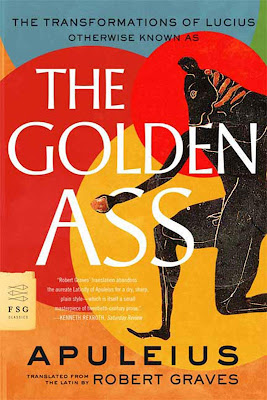 Apuleius's dazzling novel, The Golden Ass, is classic and a joy to read.  Yet it is unknown to the majority of readers of the Western canon,  because they have been taught that the novel was not invented till the eighteenth century.

Fans of the classics will be intrigued, but not surprised that the Greeks and Romans preceded the Europeans in novel-writing. And  The Golden Ass, written in Latin in the second century A.D.,  is a masterpiece that has achieved the status of a cult classic.  Hilarious, wild, bawdy, and religious, it is too politically incorrect to appeal widely these days; at least that is my assumption.  Yet one imagines John Barth and Ursula K. Le Guin poring over this strange mix of comedy, magic realism, eroticism, philosophy, religion, and metafiction.

Does it sound too weird? Apuleius tries to prepare us in his Address to the Reader.  "If you are not put off by the Egyptian story-telling convention which allows humans to be changed into animals and, after various adventures, restored to their proper shapes, you should be amused by this queer novel, a string of anecdotes in the popular Milesian style, but intended only for your private ear, which I call my Transformations."

It centers on the consequences of curiosity: Lucius, the narrator, is transformed into an ass for spying on a witch - beware of witches!   Lucius relates his adventures while he is a beast of burden, in the form of the animal most hated by the goddess Isis - and we wait with bated breath for him to escape his captors and be transformed back into a human.  Apuleius interweaves many mesmerizing tales in the narrative, including a long, beautifully-written version of the myth of Cupid and Psyche.

Apuleius was born around 125 A.D. at Madaurus in Africa Proconsularis, and educated in Carthage, Athens, and Rome.  He traveled widely, became a professional orator in Rome, and a priest of the imperial cult in his province.  Unfortunately, magic did not happen not only in books:  it was widely believed in and practiced. After agreeing to marry an ex-student's mother to keep the money in the family, Apuleius had to defend himself against charges of magic from relatives who believed he had used magic to become the heir.  His defense speech, the Apology, is extant.

Apuleius's Latin style is convoluted and archaic, a challenge to English translators.  Robert Graves explains that he did not attempt to imitate it. He writes: "paradoxically, the effect of oddness is best achieved by writing in convulsed times like the present in as easy and sedate an English as possible. " And Graves's translation is fascinating, if a bit subdued.

There are many adequate translations, and a few excellent ones.  I enjoyed Jack Lindsay's lively translation, and  of course Robert Graves' is superb.

So now I shall put on my bifocals and get back to my book.  I look forward to reading the Cupid and Psyche myth again.

Email ThisBlogThis!Share to TwitterShare to FacebookShare to Pinterest
Labels: Apuleius, The Golden Ass