The Plague As We Know It: Drinking Iced Tea Outside and Other Musings 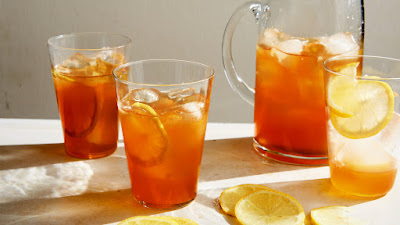 I sat on the sidewalk slurping an iced tea. I took the heavenly drink outdoors because I do not unmask at stores in Plague Times. While quaffing I noticed the plastic glass was environmentally-unfriendly. ADD TO CHECKLIST: inspect to-go glasses before you order.

My relationship with iced tea goes way back - to the late twentieth century. It used to mean Lipton black, or Lipton knock-offs, with sugar and a lemon slice, served in a frosted glass.  In my opinion, ice is wasted on Earl Grey, Lapsang Souchong, and anything herbal.   I still go for iced Lipton and the knock-offs.

While I drink tea, I eye my shopping bags. I do not shop on Black Friday - for the usual reasons -  but thought I might find some deals later. Of course the half-price stickers had been yanked from the Leuchtturm  notebooks.

I love Leuchtturms, which have the best, softest  paper, but even half off $22 is absurdly expensive, and I'm not paying full price. They would have made nice gifts - that is my regret.  The new Diana Gabaldon was 50% off on Black Friday. Now it is 25% off.  (A friend is 100th on a library hold list so she wants it.)  Nor are the essays by Lydia Davis or the new Louise Penny on sale.  I waver.

And then there is the Anne Klein coat ($50) that looked so nice in the ad.   In person, it looks like a flannel blanket with buttons. And the store was out of a particular brand of slippers I wanted to buy.   "All gone on Friday!" said a perky saleswoman.

Should I give up and go to a thrift shop? 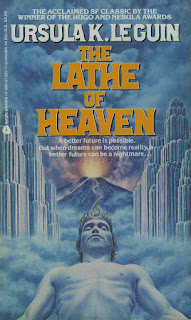 But then again, perhaps I should buy everything new and join the twenty-first century. New clothes!  New books! New music!  Nevertheless,  I take my 1973 paperback of Ursula K. Le Guin's The Lathe of Heaven out of my purse - which I brought along in case I decided to READ WHILE SHOPPING. It is set in a future where climate change has happened, and her insights are startling - because they're so real.

Here is a passage from the book:

Dr. Haber gazed at the mural and wondered when such a photograph had been taken.  Blue sky, snow from foothills to peak.  Years ago, in the sixties or seventies, no doubt.  The Greenhouse Effect had been quite gradual, and Haber, born in 1962, could clearly remember the blue skies of his childhood.  Nowadays the eternal snows were gone from all the world's mountains, even Everest, even Erebus, fiery-throated on the Antarctic shore.  But of course they might have colored a modern photograph, faked the blue sky and white peak; no telling.

This is not a "starter" Le Guin, meaning it is not a particularly good one.   Iced tea is the one thing we can rely on in a future gone crazy.