The End of Christmas

Christmas has come and gone.  I exhale with relief as I cross the holiday off the calendar.  Is it really over?  I feel like Ripley at the end of Alien - out of the shower and relaxed only to discover the alien is lurking in the space capsule.  Have I completed all the Christmas rites?  Or is there some nagging detail...?

But it is over, all over, finished until next year, I aver.   I cooked a solid three-and-a-half-star meal, and  I give myself a literal foil star from the mini-tree as a souvenir of improvising at a touch-and-go holiday gathering. 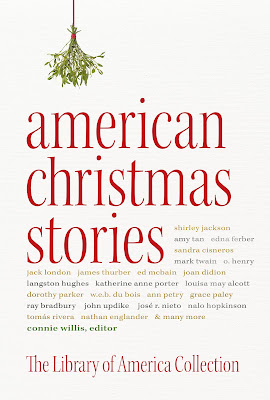 It began well. Christmas Eve was very merry.  How did I manage it? You see, I ordered the new Library of America anthology, American Christmas Stories, edited by Connie Willis.  We read aloud two hilarious pieces,  Dorothy  Parker's satiric essay, "The Christmas Magazines: and The Inevitable Story of the Snowbound Train," and Robert Benchley's "Christmas Afternoon," a riotously funny story about an irascible family Christmas gathering.

And then our actual holiday dawned  - Christmas!  We each got one present - a book we chose ourselves. And so we read and listened to carols, while the cats joyously knocked over the mini-tree and batted decorations around.  We set the tree back up,  they knocked it down, and on and on.

In the afternoon, while the dinner cooked, we took a Christmas walk. We were unusually mellow, because of global warming. (It was warm on Christmas -  an aspect of planetary doom yet momentarily relaxing!)  No snow, which meant no special gear was needed for the outdoors.  We took a lovely walk in a park - we call it the Trixie Belden walk, because in one of the Trixie Belden mysteries (Trixie is an amateur sleuth like Nancy Drew), she visits her uncle's sheep farm, in the vicinity of this particular park.  (Of course the uncle's farm would have been sold and developed decades ago.)

We glowed with health. Back home, my goal was to serve dinner as soon as possible. I removed the lid from the slow cooker,  and was anguished to discover the pot roast was still tough, not yet done.  I did my best to stay cool.

"Just a few more minutes.  We'll have the pie first," I said brightly.

"We'll have the Brussels sprouts next," I said brightly half an hour later.

I was wondering desperately if there was anyplace we could order pizza on Christmas.

The thing about men - they have no holiday mood control.  Nada.  They're hungry, and when we women make a snap decision to watch the comic movie, Don't Look Up, while the pot roast cooks, they grunt and glaze over.  Perhaps they would prefer to watch sports, or they crave alcoholic beverages, but we did not think of this.  (The fridge was stocked with Diet Coke and ginger ale, because we are teetotalers, and I forgot to provide strong drink.)

"Damn!" I escaped into the kitchen. "Dinner will be done in 10 minutes," I called as I checked the far from tender pot roast.  Then  I set a couple of timers at random. If timers keep going off, the guests think actual cooking is going on.

"I'm just cooking noodles," I called.  And it did seem a good idea to have noodles, so I heated up the water. When it finally boiled, I dumped in the noodles and called, "Ten minutes now!"

And I meant it.  Done or not, we would eat.  In 20 minutes, I declared the meal ready - and the pot roast was tender enough.

It was a pretty good meal, though very late by midwestern standards.

Then there was more pie.

Finally, we were in our pajamas.  It's over for another year.  As for the dishes,  "We'll think about that tomorrow!"