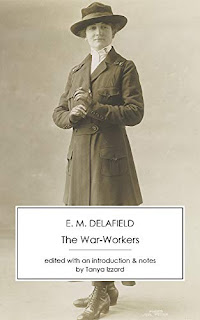 In my next life, I plan to gush less about books.

"I adore every word E. M. Delafield wrote,” I said effusively at a meeting of our Ladies of the Badlands book group.   I had just finished rereading The Diary of a Provincial Lady, a collection of her witty, charming columns about domestic life, originally published in Time and Tide magazine in the 1920s. (Delafield wrote four other Provincial Lady books.)  Never loath to try a new author, my obsessive friends scrawled her name on their hands, phones, and cocktail napkins.  At our next meeting, all were Delafield groupies intent on planning a Provincial Lady literary tour of England.

"A pity about Omicron," our friend Janet said.  "I'd love to travel again."

Ah, we'd like to visit a prototype of the provincial lady's village in Devon.  And we may add some details from the villages of Barbara Pym and Angela Thirkell, too. There are maps in Angela Thirkell's books.  Bizarrely, our geographical roots seem to be not so much in the Badlands as in middlebrow women's literature.

If you gush, you set yourself up as an expert.  After claiming that I adored every word Delafield had written, I read on and discovered that was not true. The Provincial Lady books are so charming that I expected sparkling wit in every sentence of her novels.  But her writing is very plain and uneven: Delafield's prose is a quiet backdrop for her sharp observations.

But this weekend I tore through Delafield's lively second novel, The War-Workers, a worthy predecessor of the Provincial Lady books.   In this enjoyable novel, she sketches the daily lives of a group of women volunteers doing war work at The Midland Supply Depot in England during World War I. They toil long hours, mostly at clerical and secretarial work  - sometimes  till 11 p.m. - at the behest of Charmian Vivian, the 30-year-old director who insists she is too busy to eat lunch and must stay in the office hours later than her staff. It's hard to say exactly what she does, though we are assured it is necessary.  She writes business letters,  checks accounts, conducts interviews, meets trains, arranges tea and snacks for the traveling soldiers, meddles in military hospital administration, and even staffs a canteen with her own overworked volunteers because of a rivalry with her mother's friend, Lesbia Willoughby, whose idea the canteen was.  Char does not realize or care that her staff is exhausted on the nights they serve at the canteen after a full day at the office. Born with a silver spoon, Char goes home every night to her parents' posh mansion where her former nurse, Brucie, spoils her with lovely meals.  And her bedroom is blessedly warm and luxurious, unlike those of the volunteers at the hostel.

The women volunteers at the Depot thinks Char is "wonderful" - and they need this heroine-worship, because their lodgings at the hostel are freezing, the food is bad, and the Superintendent does not have the budget to run the house well. When Char has to stay there for a few days, you can imagine how little she likes it!  And it never occurs to her that her women employees suffer from the cold just as much as she does.

The arrival of Miss Grace Jones, a young Welsh woman who has done secretarial work for her father, shakes up the staff.  Not that Grace is a troublemaker - quite the contrary. - but she often says what she thinks.  At one point, she suggests that Char would not skip lunch if she didn't get so much attention for it. And when Char's mother, Lady Vivian, takes a shine to Grace and invites her to visit, Char is indignant.  Dramatic mother-daughter issues are triggered.

I was absolutely glued to this book, intrigued by Char's self-deception about her motives, and the difficulties faced by working women during the war.  Women were needed in the work force in the early 20th century, but there was much opposition.  And we see some of that in Char's home.