Cornelia Otis Skinner (1901-1971), the actress, playwright, and humor writer, is my favorite writer after Tolstoy and Doris Lessing.  I laughed so hard over her 1936 collection of humor pieces, Excuse It, Please!, that I spat out my tea.  This is not unheard of:  I guffaw uncontrollably over humor columns of the 1930s, '40s, and '50s.  But the lone cackle of a woman reading Skinner in a coffeehouse may be an eerie, even uncanny sound, like the macabre laugh of the first Mrs. Rochester - so I  read her at home. 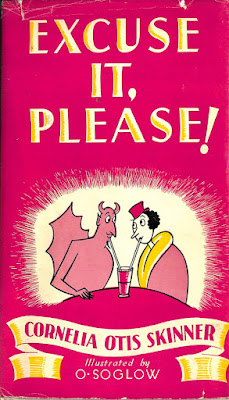 Skinner is best-known for Our Hearts Were Young and Gay, a jocular account of a trip to Europe after graduation from Bryn Mawr,  co-written with her friend  Emily Kimbrough. This is her only book in-print.  Kimbrough's, too.  But Skinner's humor pieces, published in The New Yorker, Harper's Bazaar, Vogue, and Good Housekeeping, are even funnier, I think.  She was not a member of the Algonquin Round Table, like witty, sad, drunken Dorothy Parker, Who Might As Well Live, but a down-to earth humorist who, in Excuse It, Please!, ridicules the flaws "in this country's telephone system,"  wonders why horses are no longer named Gipsy and Rob Roy, instead of the wordy Blessington Parity and Castle View Surprise, explains the horror of acting at matinees in front of suburban coughers, and the stress of taking a literacy test in order to register to vote.

She is always funny, but I especially love "The Wrong Party."  She muses on the fallacy that a gathering of famous artists, musicians, and writers will always make a glamorous party.  And then she provides examples that we can relate to, even though the artistic people we partied with may be on a lesser plain.

"We were just discussing the Respighi.  What did you think of it?"  For a moment I thought he was referring to something they were eating; then the distressing realization came to me that this was a party following an important concert...

"What did you think of it?" I countered archly...

Thereat the conductor began a dissertation that for me had all the clarity of cuneiform.

Then there is "Med to Mum," a piece about the enthrallment of the encyclopedia.  When Cornelia and her husband argue about something intellectual, she checks the MED TO MUM volume.  Soon she forgets what she was looking for.

If you are neither horsy nor athletic, you will relate to her essays on horse shows and football.  Guess what? She dislikes both!  Those were the days when women didn't have to pretend to be athletic.  I still don't care for horses, other than Black Beauty, nor do I know the rules of football, thank God.

What I like about Skinner:  self-deprecation was an accepted part of comedy.  Women did not have to be role models every minute of the day, thank goodness.  Nor were they always networking and kowtowing.

So much fun!  If only I'd lived then, everything would have been a laugh, and humor wouldn't have been censored.  Now on to another volume of Skinner.  I know I have one somewhere.

Who are your favorite old-fashioned humorists?