Loneliness, Heirlooms, and "House of Mist"

Here is why wills should be watertight:  my relatives are fighting grotesquely over an estate. The conflict is infinite, like a long bad novel by David Foster Wallace; and anyway, the deceased had no money, which is bound to come out eventually. As far as I can tell, his greatest "asset" was his car.  I don't drive:  I don't want to pollute.  But the squabbles over money began before he died.  And that was about the time he ran out of money.

"He is the loneliest man I've ever met," a working-class poet once told me.  Yes, he was lonely. I am haunted by an e-mail from another relative:  "Given his age and numerous health issues, no autopsy is being done."  Oh, my God!  Would an autopsy be normal?  Surely not!  What did he mean?

Too much Agatha Christie? 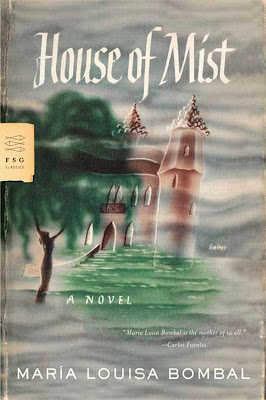 And much wearied, I turned to one of the most beautiful books I've discovered this year.  This charming novel, House of Mist (1946), by the Chilean writer Maria Luisa Bombal, proved to be a gentle Cinderella story crossed with Wuthering Heights.

Bombal's style is simple but perfect, every sentence lean and luminous.  She begins on a humorous note.  "The story I am about to tell is the story of my life.  It begins where other stories usually end; I mean, it begins with a wedding, a really strange wedding, my own."

The narrator, Helga, is a sweet, slightly bewildered Cinderella.  From childhood, her poetic imagination depends on a reversal of reality.  Flights of fancy are matter-of-fact to her. An orphan living with her Aunt Merdedes, she pores over her late mother's fairy tale books and fantasizes about being Eliza in "The Wild Swans," the princess who knits 12 nettle shirts to free her brothers from the witch's spell that turned them into swans. She also relives "The Little Mermaid." Her favorite story, however, is "The Snow Queen," in which faithful Gerda pursues Kay to free him from the snow queen's magic.  She imagines she is Gerda, and  her friend Daniel is Kay.

Helga idolizes her gruff, handsome neighbor, Daniel, whom she calls Bear, because of his size and temperament. But Daniel does not reciprocate her feelings.  He has a crush on Helga's beautiful  cousin, Teresa.  Daniel tells  Helga she must cut off one of Teresa's blond braids to prove she loves him, and finally she agrees.  In a comical scene, Helga's scissors are blunt, and as she saws at the braid, cutting only a few hairs, Teresa wakes up.  Aunt Mercedes, who believes Helga tried to cut the hair out of jealousy, banishes  her to live with Aunt Adelaida, a spinster.  The servants say of the controlling aunt, "When she is not walking around with a broom in her hand, she is flying seated on top of it."  But Helga still lives within a fairy tale:  she learns to sew and embroider beautifully, and dreams while she sews her cousin Teresa's gorgeous trousseau.

But how about Helga's marriage?  I don't want to give away too much.   Let me just say that she marries a brooding Heathcliff.  Will Helga find her prince? What is real and what is not?  We know no more than Helga till the end of this book.  And is the ending real?  Or a dream?