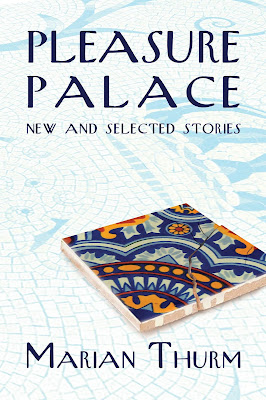 I loved Marian Thurm's stories in The New Yorker, and faithfully read her novels and collections of short stories. Then, suddenly, she  disappeared.  One minute writers are beloved by critics, the next you wonder where they are. And so I was pleased to discover her brilliant new book, Pleasure Palace:  New and Selected Stories.

These delightful short stories, published between 1979 and 2021, are graceful, witty, and vigorously engaging. Thurm has a novelist's eye for detail, and the stories are like mini-novels, filled with minute details about the characters' taste in furniture and showering habits as well as their problems in life and love.   In the early stories, characters in their twenties and thirties are anxious and self-absorbed, worried about their unfulfilling jobs and the dim possibilities of marriage.  In the later stories, they worry about aging parents and mourn the death of loved ones. Sometimes widows and widowers are lucky enough to find love again.

In "Banished," Cliff, a widower, bonds with a retired English teacher over a comma.  Outside of Bloomingdale's, they stop in front of a homeless man who is holding a sign that says: HOMELESS, HUMILIATED VETERAN.  The woman says, "It's the comma that really gets to me.  ...  Plus, the word 'humiliated.' Retired English teacher that I am, I have to admit the comma between 'homeless' and 'humiliated' kinda breaks my heart." Cliff and Jessa become friends and fall in love but alienate Cliff's daughter.  The daughter's anger is unsurprising, but another loss for Cliff.

Some characters fall out of love.  In "Today Is Not Your Day," Lauren falls and breaks her kneecap after her fiance Alex breaks up with her.  Neither realizes that she will be incapacitated for months: she will even need his help to get out of bed and shower.  Lauren prolongs her stay by neglecting her physical therapy exercises.  But is that love?  A new bitter scenario awaits her.

In "Pleasure Palace," by far the bitterest story, the narrator mourns the loss of her husband, Jordan. The scenes at the hospital are excruciating:  when she makes the decision to have Jordan unplugged after a brain hemorrhage plunges him into a  coma,  she cannot bear to sit beside him while he dies.  But almost equally excruciating is the discovery that  the contractor Ron is botching his work on the new "pleasure palace" of a bathroom she and Jordan had planned.  Ron complains that he can't concentrate because his gay lover has left him for a woman.  She thinks, "... the love of my life has been transformed into ash and chips of bone while Ron's heartthrob is alive and kicking and heading back to the altar for another shot at it.  ... So cry me a river, Ron."

Other stories are less fraught, dealing with ordinary problems of  divorce. In "Still Life," Brad's ex-wife, Nina, insists that he attend her parents' 35th wedding anniversary party.  Nina  has claimed she is sublimely happy with a new husband and baby, but her husband is not there. Nina's grandmother nabs Brad, and rebukes him for not keeping the marriage together.  The grandmother says that Nina's self-absorbed husband, a doctor,  treats her with no tinge of romance.

These  stories are brilliant, funny, poignant, and never self-pitying.  "Yes, I've felt that," you will say, or "Yes, I know that person."  Thurm delineates the difficulties of everyday life with extraordinary flair and compassion.  Completely absorbing:  a good book to read on the holidays.