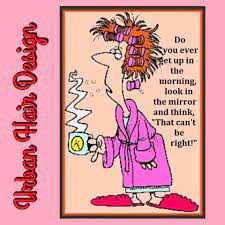 “I’m having a hair emergency,” I told the young woman.

Usually I stick something in my desperately-in-need-of-a-haircut before I go out, headband, barrettes (it hardly matters), but I’d I’d hurried to catch the bus without bothering with my frizzy hair.

I chose a plastic headband, nothing with ruffles, and went to pay for it.

A mom and daughter were at the counter in front of me.  The daughter tried to steal a pink thing with a ruffled flower.  Her mother made her put it back.

The clerk found them adorable.  There I am, less adorable.  Have I grown old overnight?  I think I have.

I smiled.  “Could you take the tag off this?”

She didn’t smile back.

The mall is a horrible place, but fortunately I didn’t spend much time there.  I rushed out to Barnes and Noble before the temperature dropped into the single digits again.  What a lovely day:  in the 30s, so the coat was open.

At B&N the barista asked my name when I ordered a latte.

"How do you spell that?"

When I told my husband later, he said, “Your name isn’t Cat.”

And then I shopped for books.

I found a copy of Roddy Doyle’s The Guts, a sequel to The Commitments.  We are big fans of The Commitments at our house.    I also bought Robert Harris’s new novel, V2. for my husband.

And then I realized that I hadn’t chosen a book by a woman, and  oddly I have read more books by men than women this year.  I picked up a historical novel about Edna St. Vincent Millay, Erika Robuck’s  Fallen Beauty.

What am I reading right now? you may wonder.    Mrs. Oliphant’s Miss Marjoribanks, a predecessor of E. F. Benson’s Lucia books. The heroine, Miss Marjoribanks, is very, very funny.  And this is a Virago, for those of you who like them.

And so, you all, I’ve stocked up on books.  I haven’t told my husband yet about The Guts, because he doesn’t like me to bring more books into the house. I’ll give it to him eventually.

Like Roddy Doyle's character, I've never done Facebook.  And so this is my idea of a faux Facebook entry.  But I understand that Facebook is considered very out-of-date and scandalous now, so I will stick to outdated blogging.