Weekend Reading: In Which I Recommend Books 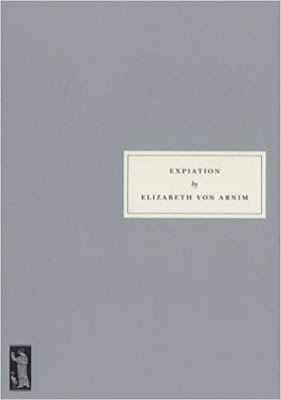 I hope you're ready to read some "real" books this weekend because you're going to get text neck if you don't get off the phone. You only need the phone to call Uber and you know it. Meanwhile, books are bursting out of your bookcases or bricks-and-boards shelves.

You protest that you don't need more books.

But perhaps you do need a few for the TBR list.

Elizabeth von Arnim is a charming novelist. Her best-selling first novel, Elizabeth and her Garden (1898), is very slight,  but it was immensely popular, the meditations of a woman who flees to her country house and spends her days in the garden.  (The gardener does the actual gardening, though.)  I myself began with her more plot-driven novel, The Enchanted April, after seeing the movie adaptation.  It begins during a rainy spring in London.  An unhappy woman sees an ad for a villa in  Italy and organizes a house-share with a group of women.  Italy is warm, and the experience is  life-changing.

I have enjoyed many of her novels over the years, and recently picked up Expiation (1929), published by Persephone.  I recommend this highly if you want an intelligent, fast-paced novel.  Von Arnim writes about the financial struggles of a middle-aged woman.  In this rather solemn comedy, Milly Botts, a lovely, charming widow, learns that she has been written out of her rich husband's will, except for a small bequest of 1,000 pounds. The rest goes to a Home for Fallen Women.

Obviously her husband had found out she was having an affair, and now everyone will know.  Humiliated, she runs away to London.  She stays in horrible lodgings, and there is one crisis after another.  Dependable people turn out not to be dependable. They need her help more than she needs help - perhaps.  One coincidence is so unbelievable that it actually seemed  credible, but overall there is a measured mix of bleakness and humor.  Von Arnim doesn't mince words about what may lie ahead for Milly. 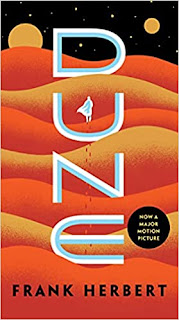 Are you psyched that the  movie Dune just debuted in the theaters and on HBO Max? It's time get out your copy of Frank Herbert’s ecological classic, which won the Nebula and Hugo Awards in 1966.

Arakis is a desert planet.  The politics of water dominate. Water is the most precious commodity on the planet, though the ruling class are never dehydrated and live in luxury.  The native Fremen in the desert must wear “stillsuits” that recycle every drop of sweat and urine while they travel or work in the spice mines. (The valuable spice is addictive: it is Arakis's major export.) When someone dies, the water is taken from the body to be reused, because 70% of the body is water.  Plastic dew collectors save every drop of condensation for growing plants. Dangerous sand and dust storms blow up to 700 kilometers an hour and “can eat flesh off bones and etch the bones to sliver.”  There are also giant worms.  But the planetologist, who knows exactly how much water is needed to make the planet green over the next few hundred years, teaches the people how to change.  The new ruling family, the Atreides,  hopes for political stability and greater prosperity for the poor, as they struggle to balance the greed for the spice,  but alas there is a coup.  And then they, too, struggle to survive. 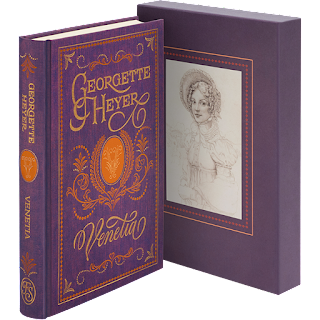 I'm always meaning to read Georgette Heyer, because she has so many fans.  People love her Regency romances. I did enjoy The Transformation of Philip Jetta, her first novel, which has been reissued by Dover and Modern Library Torch Bearers.

But now that the Folio Society has published Venetia, I feel I should take Heyer more seriously.  Ironically, this is one of the few I've actually read, but I loved it.

Here is the Folio Society description:

Georgette Heyer is one of the world’s best-known and best-selling writers of historical romance, and Venetia is the perfect introduction to her work. This edition celebrates Heyer’s witty and clever Regency society novel with a dazzling new introduction by advocate Stephen Fry and six gloriously imagined and insightful illustrations by Sally Dunne. Lettering artist Jessica Hische completes the edition with a beautiful gold-blocked binding design that exudes both the glamour and formality of the period.

I admit, I would be more likely to reread this if I had the FS edition.  Mine has a bodice ripper cover!