The Surprising Excellence of Rose Macaulay's "Non-Combatants and Others"

Those of you who are fans of twentieth-century women's literature will probably have come across Rose Macaulay's novels in old Virago editions. I love her comic masterpiece,  The Towers of Trebizond, a hilarious chronicle of the trek of a group of English travelers from Istanbul to Trebizond. I also vastly enjoyed Keeping up Appearances and The World My Wilderness. Yes, I am a Macaulay freak.  And now Macaulay's early books are having a comeback, due to publisher Kate MacDonald's efforts at Handheld Classics.

Some of Macaulay's early books have a rushed air, as if she'd scribbled them in a wobbly taxi with ink blots flying. I rather like them anyway.  I'm thinking of Dangerous Ages (1921), a very short intergenerational women's saga.  And consider Macaulay's  pacifist novel, Non-Combatants and Others (1916).  Is it didactic? Is it political?  It wanders hither, it pereginates thither. Suddenly, about halfway through, I was  overcome with tears.  I understood the feelings of helplessness and anger of the "non-combatant."  Because here we are, 105 years after the  publication of her pacifist novel, with wars still a big business.

This slight but moving novel centers on Alix, a nervous, irritable, not entirely likable art student and pacifist who considers herself a "non-combatant." While her mother lectures on pacifism in America, Alix stays with her patriotic aunt and cousins, who infuriate her with their war work and war talk: one cousin volunteers at a V.A.D. hospital, another is with the Women's Volunteer Reserve, and Aunt Eleanor is on the Belgian Committee.  Alix agrees with her mother's pacifist principles but believes her lectures are useless. What can you do when you're this young and cynical? 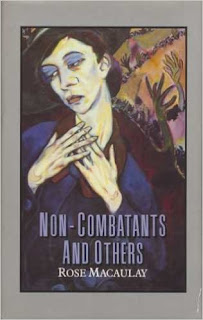 And then her wounded cousin John come home for a visit. He rips out her heart.  He converses charmingly, tells war anecdotes, and sings popular war songs around the piano.  Alix is saddened and terrified by the effort he's making.   And she is horrified by the thought of her sensitive younger brother Paul fighting in the war.  Her quasi-boyfriend, Basil, an art student, has come back wounded and is in the hospital.  All the "combatants" are in danger.

Later that night, she finds John sleepwalking and crying in his sleep.  She has a terrible night.

...Her forehead was hot and her feet were cold. She was tense, and on the brink of shivering. Staring into the dark she saw things happening across the seas: dreadful things, ugly, jarring, horrifying things. War—war—war. It pressed round her; there was no escape from it. Every one talked it, breathed it, lived in it. Aunt Eleanor, with her committees, and her terrible refugees; Mademoiselle Verstigel, with her round robin's eyes that had looked horror in the face so near; Uncle Gerald, with his paper and his intelligent city rumours; Dorothy and Margot with their soldiers, who kept coming to tea, cheerful, charming, and maimed; John, damaged and stammering, with his nervous eyes and his quiet, humorous trench talk; Basil, writing from his dug-out of Boche and shells ... little Paul out there in the dark ... they were all up against the monster, being strangled ... it was like that beastly Laocoon....

Alix decides to move to London, so her aunt arranges for  her to stay with a  distant cousin, Mrs. Frampton, and her two adult daughters, at their cozy house called Violette.  This lower-middle-class family is unsophisticated but cheerful and relaxing.

But the news of the war and war talk is still everywhere.   She hears many complaints at Violette about the Belgian refugee neighbors, the flip side of her aunt's struggles to help them.  She escapes war talk in the company of her art school friends, and is head-over-heels in love with Basil, but he has lost interest n her, and she is devastated.  She is quietly depressed, then becomes ill.

Email ThisBlogThis!Share to TwitterShare to FacebookShare to Pinterest
Labels: Non-Combatants and Others, Rose Macaulay