Reading When You're Sick: Colette's "Break of Day" and "Letters from Colette"

During a horrendous illness, I turned to Colette, the lyrical French writer best-known for the autobiographical Claudine books. She ghostwrote the series at the bidding of her rakish first husband, Willy, who ran what Colette called a "factory" of  ghostwriters.  The Claudine books were so popular they were adapted for the stage and heavily "merchandised." (The Claudine quintet consists of Claudine at School, Claudine in Paris, Claudine Married, Claudine and Annie, and Retreat from Love.)

Colette was a celebrity writer, an actress, a music hall artist, and a bisexual beauty, married thrice, who had many affairs.  After her separation from Willy in 1906, she wrote some of the most brilliant novels of the twentieth century. Would that more of her books were available in translation.  Just a handful are still in print by Farrar Straus Giroux and Vintage. 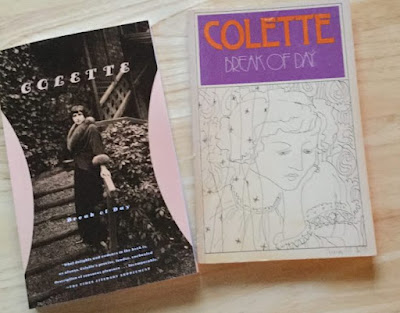 Two of her books kept me alive during this illness, Break of Day  and Letters from Colette.  Written in her fifties, Break of Day is a meditative novel, a record of the rich experiences of daily life at her house at Saint-Tropez on the Cote d'Azur.  She also muses on her changing attitudes toward love and sex in middle age.  Her sulky, charming 35-year-old neighbor, Vial, is in love with her, and she certainly likes him.  But does she want to go through the agonies of love again?  She studies the letters of her self-sufficient mother, who in her seventies gardened, tended to the poor, and slept in an out-building because she could no longer bear to sleep next to a human being.  Colette, recently divorced from her second husband,  wants to follow her mother's example.  She writes,

Whenever I feel myself inferior to everything about me, threatened by my own mediocrity, frightened by the possibility that a muscle is losing its strength, a desire its power or a pain the keen edge of its bite,  I can still hold my head up and say to myself:  "I am the daughter of the woman who wrote that letter - that letter and so many others I have kept."

The narrator of Break of Day is called Colette, but she reminds us that her double in the novel is much stronger and has more integrity than the real woman.  In old age, Colette was still attractive and had a young husband.  So much for giving up love. 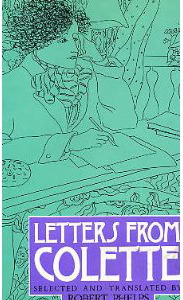 I am also reading Letters from Colette, a new discovery, though it has been on my shelf for years.  Selected and translated by Robert Phelps, this charming collection covers half a century, 1902 to 1952.  Colette is witty, original, and impish about her "adorable bulldogs, with faces like frogs," business contracts for her stage career (she played Claudine in some productions), her love affairs, wartime experiences (her husband Maurice Goudeket spent six weeks in a concentration camp), and the tragic death of her friend the poet Helene Picard.  "Like the most romantic of poets, she died in the hospital, unknown, unrecognized....  For ten days I have been working on a little study of Helene's work, which the Revue de Paris has asked me to do.  But I have never tried anything quite like this, and I'm making no progress... "

Colette is the subject of several biographies.  The biographer Judith Thurman writes in the introduction to the 2001 FSG edition of Break of Day: "Colette has always been admirable for reasons that have nothing to do with political correctness... Accessible and elusive; greedy and austere; courageous and timid; subversive and complacent; scorchingly honest and sublimely mendacious; an inspired consoler and an existential pessimist - these are the qualities of the artist and the woman.  It is time to rediscover them."

Colette is not PC - she despised feminism and the suffragists - and we can only imagine what she would have said about twenty-first century cancel culture.  I believe her emphasis on the personal life brings us back to our own feminine longings.   I am a feminist, but haven't we forgotten that personal experiences are as important as careers?

Email ThisBlogThis!Share to TwitterShare to FacebookShare to Pinterest
Labels: Break of Day, Colette, Letters from Colette