Will the Summer of '21 be remembered as the Summer of Love?   We wandered freely through the world, ripping our masks off, peacefully riding our bicycles, taking walks with less fear, and, on one occasion, abandoning al fresco dining for the bugless indoors.

Back to caution and masks.  The Fall (Demise) of Love?

Charlotte Bronte and Mrs. Henry Wood were stars in different genres. Wood, the author of 30 novels, including the popular East Lynne, was a master of the Victorian sensation novel.  There are sensational elements in Charlotte Bronte's Gothic classics, Jane Eyre and Villette, but they are subtler than Wood's ghosts, murders, screaming maidens, and vengeful villains.  Yet Wood's neglected novel Anne Hereford (1868) has much in common with Jane Eyre.

Though Ellen Wood is an uneven stylist, I enjoyed this book.  I was interested in the parallels between Anne and Jane Eyre.  Both are orphans who become teachers and then  governesses. Both fall in love with rich men who are barred from marriage for secret reasons.  Mr Rochester deceives Jane, but the milder Mr. Chandros says openly that he loves Anne but can never marry.  (A family secret.)  Wood's characters tend to be nicer and milder than Bronte's. There is depression, but not unbridled passion.  Jane leaves in disgust when she learns Mr. Rochester's secret, walking for days until she faints on a minister's doorstep.  Anne screams more than once when she sees strangers - or ghosts? - in the woods.  She wants to leave after hearing rumors about Mr Chandros, but she must wait to be paid by her employer, Mr. Chandros's sister, who is in France.  (Of course money did not stop Jane.) 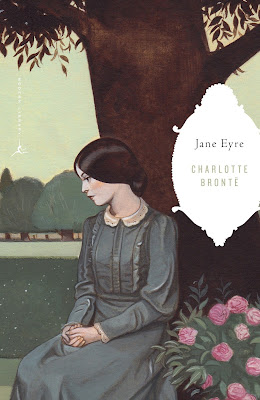 There seems to be a fine line between sensation novels and Gothics. In Bronte's Jane Eyre we have a mad woman in the attic; in Villette we have a ghost and an opium-fueled dream; in Wood's Anne Hereford we have murders, ghosts, mysterious strangers, a vengeful woman plotting character assassination, and the strange seclusion of Lady Chandros in the west wing of the house.  Is it a matter of quantity?

There are ghostly facets in Anne Hereford. I recommend this for fans of Jane Eyre and 19th-century sensation novels.