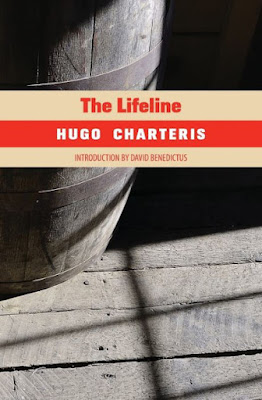 My generation was raised on comedy. We are nostalgic for what seems like a gentler time, but we feared the Atom bomb, the Vietnam War, Watergate, and life-threatening air and water pollution. From Aristophanes to William Wycherley, from Jane Austen to Kurt Vonnegut, we progressed to the satire of Kingsley Amis and the gentler comedy of Angela Thirkell.  It could be argued that comedy is even more necessary in the 2020s, between the pandemic and (probably) irreversible climate change. And so I was delighted  to discover the Scottish writer, Hugo Charteris, author of  The Lifeline (1961),  a hilarious novel recently reissued by the publisher Michael Walmer.

The Lifeline is a cheering diversion, an unmitigated pleasure.  I relish Charteris's witty observations about life in a gossipy Scottish village.  His sharp intelligence is offset by a baroque style that borders on poetry. The characters are larger than life, drawn broadly but with a fine pen.

The hero, Tulloch Traquhair, a character actor who has been fired from his role as Little John in a Robin Hood TV series, retires to a Scottish village to run the Strathire Arms, a pub he plans to turn into a hotel.  When he debarks from his Rolls Royce, he hypnotizes the villagers with his charisma and a peppering of Gaelic phrases. He is a giant of a man, with a red beard and a flamboyant personality.  He even fascinates his enemies. His rival  pub owners, Brian Creevie and his vengeful mother, Mildred Creevie, are determined to take Traquhair down.  Traquhair, who is gay, gives them plenty of grounds for gossip. When asked to judge a beauty contest, he chooses a Teddy boy as queen.

All small places thrive on gossip, but in Fluach Presbyterianism gave it a special succulence.  The new tenants of the Strathire Arms would have enjoyed celebrity even if they had merely been new inhabitants. But that Traquhair should have taken the hotel direct from the ex-convict Johnny Stephenson (and boast as much), and that he should be a semi-celebrity in his own right, and look like a twenty-stone Robinson Crusoe disguised as  Lochiel, and have a secretary who made mothers call their children in close,... all added up to the  biggest local news since the previous marchioness was forcibly removed from the castle by a coloured butler acting under the marchess's orders.

The plot races along during the renovation of the rat-infested, filthy, long-untenanted pub, where grandiloquent Traquhair plans to house the prime minister of Canada on his visit to Scotland. Fortunately, Traquhair has reinforcements: his depressed secretary, Meldrum, does most of the work, while Tulloch drinks whisky and makes the rounds convincing a bank and construction company that he has money.  Meldrum also has a beautiful wife, Olivia, and several children.  And let us just say Traquhair and Meldrum have an offbeat method of acquiring barrels of illegal whisky.

I was reminded slightly of Anthony Burgess's Enderby novels: Enderby is a poet who composes his best work in the bathroom.  Enderby and Traquhair both have a certain scruffy integrity: neither man wants to prostitute himself to the "arts."Enderby's life goes down the toilet after he wins a poetry prize, and Traquhair refuses to do TV commercials.

The Lifeline is so much fun to read.  Has anybody read Hugo Charteris?  Fortunately, some of his other novels are in print. And I must read Scottish literature, which seems bizarrely little-read here.