Uncanny Lit: Why We Love Wilkie Collins's "The Woman in White" 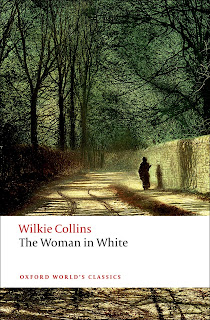 It is too hot to take autumn seriously (87°), and yet we have turned  already to Uncanny Lit:  Victorian sensation novels,  Gothic novels, and ghost stories by Sheridan Le Fanu rule the supernatural season.  I am happily reading Wilkie Collins, master of suspense and sensation. I opted for The  Woman in White (1859), which was dubbed the first sensation novel, and outsold even Uncle Tom's Cabin, the American best-seller of the 19th century.

Collins's prose is simple and effective, but the plot is more twisted than I had remembered.   Oh no, stop! I wanted to say as Collins guides us in and out of the depths of hell inhabited by theWoman in White, Anne Catherick, a Persephone-like escapee from a mental asylum. Her enemy, a baronet (we'll call him Hades), had locked her up in the asylum on false pretenses.  She knows his secret - which will not be revealed till much later. 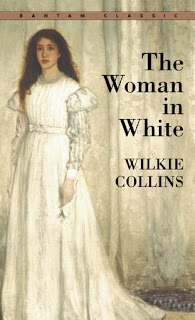 Collins is a craftsman who narrates this rapid-paced novel from multiple points-of-view.  Each narrator's voice is distinctive; Collins rivals Dickens in character delineation. The first narrator is Walter Hartright, Teacher of Drawing. Discouraged by low-paying work in London, he has landed a four-month teaching job at Limmeridge House in Cumberland.  As he walks the road away from London, he is astounded by the apparition of a woman in white.

There, in the middle of the broad, bright high-road - there, as if it had that moment sprung out of the earth or dropped out of the heaven - stood the figure of a solitary Woman, dressed from head to foot in white garments; her face bent in grave inquiry on mine, her hand pointing to the dark cloud over London, as I faced her.

I love the anaphora and the vivid, almost threatening phrase, "her hand pointing to the dark cloud over London, as I faced her."  Walter is spooked at first, but when Anne asks the way to London, he gallantly accompanies her part of the way and finds her a cab.  After the cab takes off, two men appear and ask a policeman if he had seen the woman in white, who had escaped from the asylum.  Walter is aghast, but does not betray Anne, and does not regret helping her.

At Lammeridge House, we are fascinated by Marian Holcomb, a witty woman with a magnificent figure but an ugly face.  (A footnote speculates that Marian is based on George Eliot).  Marian is, in my feminist reading, the most important character in the book, after the Woman in White herself. It is in Marian's vivid diary that we read the most intriguing accounts of the mystery.  And we wonder if Marian's diary is the dark side of Esther Summerson's cheery-even-when-struggling diary in Dickens's Bleak House. (Dickens and Collins were great friends; Bleak House was published in 1852.)  Marian's half-sister, Laura Fairlie, is fair and gentle (a bit like Ada in Bleak House?), and almost identical to the woman in white, almost her twin. Walter falls in love with the sweet but submissive Laura, but she, it turns out, is engaged to Anne Catherick's evil baronet.

A case might be argued that Anne is the central figure of this intriguing novel. She is often in the background, but her appearances are like earthquakes. Not only does she uncannily resemble Laura Fairlie, but she was attached as a child to Laura's mother, Mrs. Fairlie. For a short time Anne and her mother lived in the village, and the late Mrs. Fairlie took a fancy to Anne; it was she who told Anne she should wear white. One day, Walter and Marian find Anne cleaning Mrs. Fairlie's gravestone.  A schoolboy had mistaken the white-clad Anne for a ghost. She had come to the village to send a letter warning Laura about the baronet.  No one believes her.  Don't you love a good sensation novel?

There is an odd thing about having read a novel long ago.  I had misremembered parts of the plot.  Didn't the brilliant, homely Marian  and gorgeous Laura give shelter to the mysterious refugee, Anne Catherick, the Woman in White?  No, they did not.  That would be another novel. 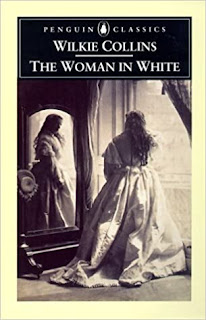 It is a delightful book- so much so that I don't mind the unlikelihood of events and the stereotypical Laura.

The Woman in White is a classic.  More Wilkie Collins later!

Email ThisBlogThis!Share to TwitterShare to FacebookShare to Pinterest
Labels: The Woman in White, Wilkie Collins