The Sympathetic Reader: A Bubbly Golden Age Mystery and the Theatrics of Star Ratings 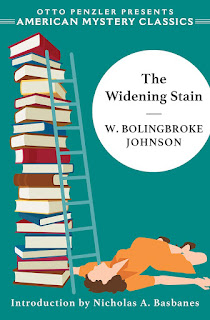 I enjoy a genre wallow. I recently came across a bubbly Golden Age mystery, The Widening Stain (1942), by W. Bolingbroke Johnson, which was the pseudonym of Morris Bishop, a Romance Languages professor at Cornell University.  Johnson wrote only one mystery. Don't expect too much, but if you like "librarian fiction," this is for you.

The witty narrator, Gilda Gorham, is the chief cataloguer at a university library staffed by the usual vague scholars and impertinent students.  When we meet her, she is musing on the question of whether or not she is a spinster. Her quasi-boyfriend, the witty Professor Parry, assures her she is not, and makes up a limerick on the spot.

"A morbid young miss of Westminster
Was in terror of being a spinster;
But they say that you can't
Make a spinster enciente,
And that is what really convinced her."

Professor Parry is a limerick addict, and there is much witty repartee.  But Hilda also proves herself a smart amateur detective after she discovers the dead body of a femme fatale French professor who fell from a rolling ladder in the library.  The police say it was an accident, but Hilda wonders.  Could it have been because she was up for tenure? Or connected with the suddenly much-in-demand Mansucript B 58? And when she discovers another corpse in a locked room containing rare manuscripts and erotica, the police admit it is suspicious.

This is a very slight, light read, hardly a classic, but one to add to your academic mystery collection.

THE THEATRICS OF STAR RATINGS

I do not go in for star ratings. They are meaningless.  I know, I know: a 5 is "Brilliant!", and a 1 is "Hell to read!"  But without a written explanation, one person's "Brilliant!" may be another's hell.

I prefer words. In my blog posts, I enjoy using popular superlatives like "stunning" and "horrific," and adore the  juicy, much deplored "unputdownable" and "compelling." The latter two, I heard, are banned from reputable literary journals.  I love the word "unputdownable."

But back to star ratings:  I confess, I do enjoy them at Goodreads.  When I occasionally post there, I love clicking on star ratings. It's fun! It's part of the campy experience of the website!  And most of the people who read the books I like are thoughtful, not the types who write "I hate it!"  and click on 1 star.

Writers don't like star ratings, I hear. If I were on Twitter or some hipper social media platform, I would doubtless unearth lots about this.  I don't, so I checked  Google, and found a post by a writer unknown to me, who complains  that every 4-star review brings her overall ratings down.  She says, "I had to get 100 more reviews, with enough of them 5-stars to bring it back up to 4.5 overall."  Wow, very few books have a 5-star average.  What an unrealistic goal! And how does she get 100 5's?

Not all star ratings are innocent.  There are "star bombers" at Goodreads.  An article at Time magazine reports:

Scammers and cyberstalkers are increasingly using the Goodreads platform to extort authors with threats of “review bombing” their work–and they are frequently targeting authors from marginalized communities who have spoken out on topics ranging from controversies within the industry to larger social issues on social media.

What a world.  The pandemic, and star-rating terrorists, too.

As a sympathetic reader, I try not to judge by star ratings.  And I do not often give them, so we can all relax.