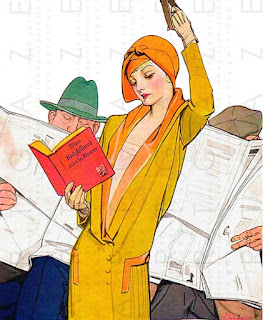 "All you have to do is show up." But I am befuddled at airports: I got frisked at O'Hare because I was holding a Kleenex when they scanned me.  Mr. Nemo was once detained because he had a battery-operated alarm clock in his suitcase.

We might as well stay home and read: my travel plans often revolve around the question of how many books to pack anyway.  Because what if all the bookstores close?  (This sounds less ridiculous now.)  In Alison Lurie's Foreign Affairs, the heroine forgets to bring a book on a plane.  My nightmare.

Books are essential to our traveling identity. In fact, I remember my travels by the books. On Amtrak to New York:  Patricia Wentworth and Galway Kinnell.  On a bus to Chicago:  Margaret Drabble.  On a plane to Texas:  Barbara Kingsolver. On another plane:  H. F. Heard's A Taste for Honey.

Nowadays I pack a Dickens, that most readable and charming of writers.  I recently enjoyed a fourth reread of his dark page-turner,  Our Mutual Friend.  Like John Irving and Desmond on Lost, I have read almost all of Dickens and deliberately saved one  to read later.  I will not tell you the title, but I like the idea of having a "new" Dickens. 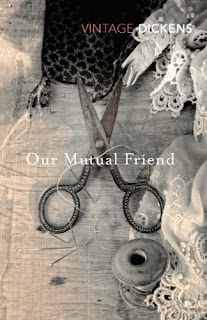 I am enthralled by Our Mutual Friend.  Murders, fraud, unscrupulous networking, blackmail - I was surprised by how grim it is. But there is also humor, gorgeous language, and vividly-etched characters.  Could any heroine be wittier or more whimsical than Bella Wilfer? Could anyone be sweeter than the Boffins, heirs of the Golden Dustman?  And then there is the bright, sharp dolls' dressmaker, who financially supports her "bad child," her alcoholic father.  This reading I had a soft spot for Eugene Wrayburn, the languid, witty slacker who falls in love with  Lizzie Hexam, the lovely daughter of a rough man who made his living trawling for corpses in the Thames.

One day in 2011, I had an Our Mutual Friend revival. I carried it in a bike pannier.  Mr. Nemo and I were bicycling along the Wabash Trace Nature Trail, a trail that extends from the Loess Hills near Omaha to the hamlet of Blanchard, Iowa (population: 50). The first six miles are uphill, and many stop at the top of the hill in Silver City and head for The Hood Bar & Grill. We are made of sterner stuff, and keep on pedaling.

Once past Silver City, you see no one. We passed shaggy farms and scrubby woods. The crickets were chirping, or perhaps the cicadas, and the light was autumnal, with the prairie grass turning wheat-yellow.  It should have been a blissful experience, but I was longing to get back to my book. 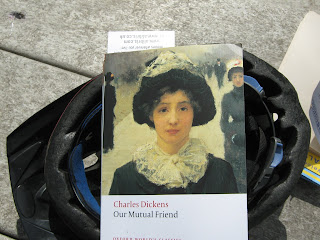 Do you feel your life is suspended when you're not reading a book?  When we took a break, I rushed to the gazebo and raced through the chapter in which the social-climbing Sophronia and Alfred Lammle discover that neither has money - and each had married the other for money.

OMF used to be my favorite Dickens, and is still a favorite.  I vacillate over which is my favorite.  The only one I dislike is Martin Chuzzlewit, but I did enjoy that the first two times I read it.

What books do you read when you travel?  And do you associate travel with certain books?  Like, perhaps, OMF?