Can a Review Be Too Vicious?

Long ago, in a different universe, before internet competition bankrupted book review journals, I was a book reviewer.  I  loved the free books in the mail and seeing my reviews in print.  I was an avid reader of literary fiction, or the occasional biography, and though my reviews were not always glowing, they were not hatchet jobs.  If I hated a book I returned it to the editor, who did not mind because he/she had little space for reviews, and less for hatchet jobs - unless they were very, very amusing.

Writers are so sensitive that they occasionally mistake a negative sentence for career-ruining criticism.  But there is something horrifying about a truly well-wrought vicious review.  Human beings glory in schadenfreude.  I am a tougher bird than I used to be, and try to take the higher, if not the high, road.  Nonetheless, I was spellbound by Michael Hoffman's brutal review in the TLS of Colm Toibin's The Magician, a new historical novel about Thomas Mann.

I have complained that reviews are too "nice."  This one is not.  It is way, way over- the- top. And after the initial excitement, I felt slightly sick about it, because the first few chapters of The Magician seemed pretty good to me. I haven't finished the book. I put it back on the shelf.  Hoffman has (only temporarily, I hope) ruined it for me by reducing it to a "biopic"  by a writer with a poor vocabulary.

Hoffman claims Toibin used no words longer than two syllables in The Master, a novel about Henry James, and three-syllable words in The Magician. Here is a passage from the review:

...  Tóibín has a dozen, or even a score, of people to push through sixty years; that makes perhaps a thousand man-years, or Mann-years, and he can’t afford to stop too many times. And so the poor words come out for them to speak. Like little soundbites, little what-might-have-been-said-by-you-or-me-in-similar-circumstances samples. Scenelets. Description intolerably bland: “In the confusion created by the war”, or “her clothes understated and expensive”.

Well, you know, it's only a book review:  it's not a critical analysis of the pandemic.

So no more complaints about too nice.

Has anyone read The Magician yet? 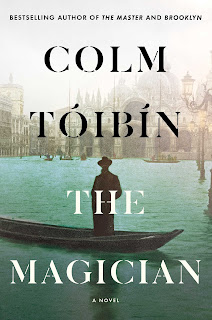