A Retelling of "Ethan Frome": Ali Benjamin's "The Smash-Up" 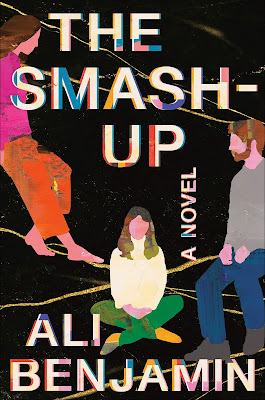 I came upon Ali Benjamin's light novel, The Smash-Up, in a tiny bookstore in a small town - it was the only day trip we managed this summer.  The cover was bright, but it was not the cover that hooked me:  it was the jacket copy. Who can resist a modern retelling of Edith Wharton's Ethan Frome?  Not I.

This clever, witty novel is gently satiric.  Benjamin constructs a plot centered on the splintering of a marriage over feminist politics and the MeToo movement.  Like Wharton's Ethan Frome, it begins with a frame story, but the main story unfolds from the point-of-view of Ethan, a sweet, likable freelancer who got rich as an advertising entrepreneur and then sold his share of the firm to his business partner, the aptly-named Randy.  Ethan and his wife, Zo, a documentary maker, have moved from New York to the tiny village of Starkfield, where their daughter, who has ADHD, attends the expensive, vaguely hippie-ish Rainbow Seed School.  Life in Starkfield has proved surprisingly expensive.

Now Ethan's fortune is dwindling - Randy has not been sending him checks - and his marriage is crumbling, partly because of Zo's alienation, but mostly because of Ethan's crush on Maddy, their twentysomething blue-haired au pair.

Although the crush is annoying, it is impossible not to empathize with Ethan, because Zo, like Zeena in Ethan Frome, is a bitch. And Zo doesn't care that she is a bitch - since Trump was elected in 2016, this seems to her to be the only viable position.  Her feminist support group, All Them Witches, meets in the living room, which annoys Ethan.  On the morning of the Brett Kavanaugh confirmation hearing, which the group plans to watch together, one of the witches pops in early with a cassrole and instructs Ethan when to pop it in the oven.

Zo and the witches are cardboard characters until the final chapter, but Benjamin's take on  Ethan's confusion and ambivalence is genuinely funny. When Ethan's former partner Randy calls from L.A. to say he's in trouble, Ethan thinks he's exaggerating.

Ethan sighs.  There are   a few things he's come to expect from Randy's calls.  First and foremost is theatrics, some kind of urgent, pulsing drama....

"The women.  They're coming for me."  There's something about Randy's voice.  A strain, just a little too high in pitch.  Ah, so this is the other version of his friend - the ranting, hysterical Randy. "They're after me, E. Oh God, I'm freaking out here."

Benjamin is more subtle than you would think in her depiction of the issues, though the ending is simplistic.  But keep your eyes on the prize:  both Ethan and Zo have ethical dilemmas, and Ethan never makes a decision - he is weaker than Zo.  Perfect beach reading, until summer formally ends - and you'll keep wondering about the politics.