A Post-9/11 Dystopian Classic: Carolyn See's "There Will Never Be Another You"

If you are familiar with Carolyn See's novels, you probably know her dystopian cult classic, Golden Days.  "This is the way the Dark Ages looked.  It was hot, and it stank," the narrator informs us.  See's critically-acclaimed 1987 novel is a hybrid of a book, part realistic novel set in the '80s boom in L.A., part dystopian tale of nuclear holocaust. And yet there are survivors. A few years after the bombs, the irrepressible narrator, Edith, and  her hairless, toothless, but these days not  not-quite-so-sick family, hobble to the beach and rediscover joy.

See's 2006 novel, There Will Never Be Another You, is even more  relevant as the news cycle commences the commemoration of the anniversary of 9/11.  This short, spare, moving novel begins on 9/11 and continues into a future much like ours,  characterized by the spread of lethal viruses. 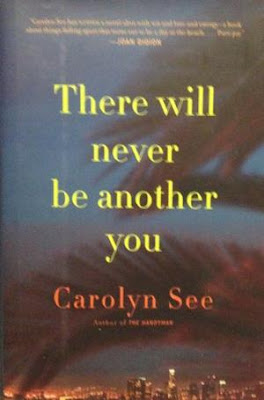 The two main characters, Edith, a widow, and her son Phil, a dermatologist, are in mourning.  Edith's husband died the night of Sept. 10,  and, she is racked with grief. When Phil calls the next morning to urge her to turn on the TV, because history is being made, she mechanically obeys.   But her reaction to the destruction of the World Trade Center is  the reverse of sanctimonious: it is shocking and funny.

I admit, for a minute, I was impressed.  That was the word.  Then I thought, Fuck that!  The only human being in the world who ever loved me - except for my goofy son, maybe - died last night.  Died in my arms.  Breathed his last.  Excuse me, God, but you're going to have to do better than that if you want to impress me!  Damn fucking easterners.

See deftly reveals the extent of the imbalance between the narrative of personal loss and  the government's exploitation of public tragedy.  Edith and Phil are dismayed when 9/11 becomes the pretext for two wars.  And then there are Homeland Security's color-coded terrorism threat charts, incidents of terrorism, and the new viruses. A Homeland Security-type organization selects Phil and 37 other doctors to be "soldiers" in a war against viruses like SARS spreading across the U.S.  ("We are not soldiers.")  Phil sees some terrible things, even a case of Bubonic plague, but everything must be kept secret.  Finally, when a hospital "lockdown" is instigated, he tells everyone in the lobby that it is only a drill but to leave at once since they don't want to get mixed up with it.  He gets them out, disobeys all the top-secret orders, and leaves.

So how do you escape the nightmare?  The characters must stay or cut their losses.  Phil, who is separated from his wife and horrible children,  takes a radical approach to save his "monstrous" son from a bleak future. Family comes first, but you have to decide who your family really is.

And yet, even in the worst of days there is hope.  Life goes on, somewhere or other.  Carolyn See seems to have been the most optimistic of pessimistic American writers.  She believes in the resilience of the human spirit. And isn't that half the battle?

Email ThisBlogThis!Share to TwitterShare to FacebookShare to Pinterest
Labels: Carolyn See, There Will Never Be Another You