A Bracingly Intelligent Bildungsroman: Dorothy Whipple's "Because of the Lockwoods"

After three months of sporadically reading Gene Wolfe's surreal masterpiece, The Book of the New Sun, my brain was reeling. I loved the Ulysses of science fiction, and yet I was relieved to have finished.  I returned it to the shelf and prayed to the Household Gods: "Please, O gods, find me a great middlebrow novel." 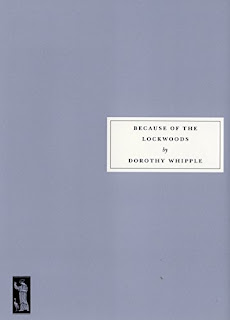 My eyes fell serendipitously on a copy of Dorothy Whipple's 1949 novel, Because of the Lockwoods. If you are not familiar with the wonderful Dorothy Whipple, that means you have not yet crossed the Whipple line (more about that later).  Whipple is one of the  best-selling authors at the small English women's reprint press, Persephone Books.

I adored Because of the Lockwoods, a smart, pitch-perfect, absorbing bildungsroman, which reminds me slightly of W. Somerset  Maugham's Of Human Bondage.  Funny, isn't it, how the great middlebrow writers fall out of fashion?  Both Whipple and Maugham are masters of plot, characterization, and readability, and yet they are underrated.  Maugham's books, or at least some of them, have remained in print, but Whipple fell into oblivion until Persephone revived her.

You may think I'm mad to compare Whipple and Maugham, but the protagonists of these particular books share traits in common.  Each has lost a beloved parent; each suffers from insecurity and unrequited love. Thea is pursued by a charming working-class entrepreneur she doesn't love, while Philip's girlfriend in Paris commits suicide when he breaks up with her, and in England he falls in love with a sickly waitress who uses him but disdains him.  Thea is more protected, because she lives at home with her mother.  Philip, an orphan, is raised in a vicarage by an aunt and uncle who don't think much of him. He breaks loose to travel abroad before returning to England to study medicine.  They both spend time in France.

But we are here to write about Thea Hunter, the rebellious heroine of Whipple's novel.  She is haunted from childhood by her family's financial problems. Mrs. Hunter, helpless after her husband's death, turned to their neighbor, Mr. Lockwood, for help with the estate.  And Mr. Lockwood defrauds the widow of a paddock, a valuable piece of property he himself has always wanted. He pretends that Mr. Hunter never repaid a $300 loan he borrowed to buy the paddock. As a result, the Hunters are left penniless, and must leave their country house to live in poverty in a lower-class neighborhood.

Thea hates the Lockwoods.  Her blood boils on the rare occasions  they are invited to the Lockwoods' grand house.  She loathes Mrs. Lockwood's condescension toward her mother, and the meanness of the horrible Lockwood twins, Bee and Muriel.  The only decent one in the family is the youngest sister, Clare.

But Mr. Lockwood is the worst,  truly an evil fairy godfather.  He  yanks Thea's siblings, Molly and Martin, out of school at age fifteen to so they can "support their Mother." This is a nightmare, since both are banished to low-paying jobs they are ill-suited for. Molly must work as a governess - and she cannot discipline children so it makes her sick - and Martin, instead of going to medical school (like Philip in Of Human Bondage?), must work in the lowest capacity at a bank.  Thea is prepared to fight Mr. Lockwood, but he forgets about her and she stays in school.

When she hears the twins and their younger sister Clare are going to France to study, she practically explodes.  She will not let the Lockwoods get ahead of her! She contrives a way to travel to France:  she will go to the provincial school with the Lockwoods and teach English while they study French. While she is there, she writes home for her copy of Villette.  I chortled. 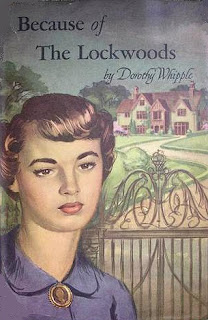 Thea has an absolutely innocent, non-physical love affair with a young French man, but is expelled from the school and sent back to England when Madame finds out.  And Thea's reputation follows her to England because of the Lockwoods' gossip.

Whipple's writing is spare, yet descriptive.  Her characters are so vivid that you can see them distinctly on the page.  The most lively of the bunch is Oliver Reade, the Hunters' neighbor, a working-class entrepreneur who proves a staunch friend to the family.  And he is mad about Thea, who is in love with the Frenchman (from whom she never hears, whom she will never see again).

Now let me tell you about the Whipple line.  I sense that there is some rivalry between two great publishers of lost women's novels, Virago and Persephone.  In a fascianting essay published in The Guardian in 2008, Carmen Callil, the founder of Virago, wrote,

We had a limit known as the Whipple line, below which we would not sink. Dorothy Whipple was a popular novelist of the 1930s and 1940s whose prose and content absolutely defeated us. A considerable body of women novelists, who wrote like the very devil, bit the Virago dust when Alexandra, Lynn and I exchanged books and reports, on which I would scrawl a brief rejection: "Below the Whipple line."

Well, I have crossed the Whipple line, and it's all fine. I love Virago, but have also enjoyed Persephone books. If only the Persephones were not so expensive:   the used booksellers knock only a few dollars off the price.  But one way or another, I will read more Whipples.  I hope they're all as good as Because of the Lockwoods.
at September 19, 2021

Email ThisBlogThis!Share to TwitterShare to FacebookShare to Pinterest
Labels: Because of the Lockwoods, Dorothy Whipple