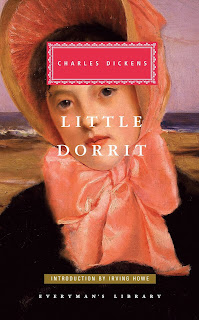 Little Dorrit is far from my favorite novel by Dickens, but that is its charm and novelty. I do not know it by heart, and that makes it seem almost new upon rereading.  Indeed, I am afraid of getting jaded if I read my favorite Dickens books too often.  I never want to lose the ability to laugh at the adventures of the traveling actors in Nicholas Nickleby, or at Mr. Micawber's financial advice: “Annual income twenty pounds, annual expenditure nineteen nineteen and six, result happiness. Annual income twenty pounds, annual expenditure twenty pounds ought and six, result misery.”

I found Little Dorrit disappointing on a first read many years ago, but it is a favorite with the critics. The great Lionel Trilling praised it as "one of the most profound of Dickens's novels and one of the most significant works of the nineteenth century," while Dennis Walder says it is "Dickens's most profound attempt to find an answer to life's mysteries."

And I enjoyed it immensely this time round - I was surprised. It is one of Dickens's darkest books, almost as dark as Our Mutual Friend, only, alas, less humorous.  Many of the characters live in prison, or are self-imprisoned.  There is the Marshalsea, the debtors' prison where Little Dorrit was born and has grown up, and where her father, known as the Father of the Marshalsea, has lived twenty-odd years.  He lost all his money and has no prospect of paying his debts.

Little Dorrit (Amy) is a very good young woman.  Here is how good she is: she goes out to work as a seamstress so she can support her father financially, and has found jobs for the rest of the family, too.  Her gloomy uncle is a musician; her older sister is a dancer (Little Dorrit found her a dance teacher); and their brother Tip has had many jobs, which he always quits, or his fired from. 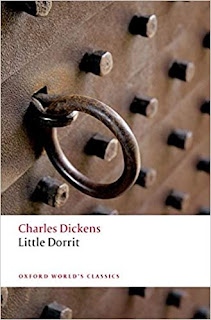 And Little Dorrit is universally kind:  Maggy, a mentally handicapped woman, proudly tells people she will always be ten years old,  and refers to Little Dorrit as "Little Mother." The two get shut out of the Marshalsea one night, and while huddling in doorways are mistaken for mother and daughter - until the woman sees Little Dorrit's face and realizes she is a woman.  And Little Dorrit is even valued by her difficult, uncommunicative employer, the despotic Mrs. Clennam, who is confined to a wheelchair.  At her house Little Dorrit meets Arthur Clennam, the depressed middle-aged son who has been away in the East for 20 years.  Little Dorrit and Clennam have much in common:  they both want to do good, and they do do good.  But Little Dorrit is cheerful and Clennam is a depressive.  A match made in heaven?


These two characters (Yin and Yang?) are very sweet, but are rather dull.  Little Dorrit is kind and charming, really too good for this world, and though I would love to be her best friend, I wouldn't want to be her.  Clennam, however, is so subdued that I barely notice him on the page.  The other characters seem to find him attractive, but I had to look to the illustrations. Maybe?

And now let me tell you about the misanthropic Miss Wade, a character who does not do much good to anyone.  We cannot like her, but she fascinates us.  She has a dark sensibility; she believes in no one and nothing,

Chapter XXI, "The History of a Self Tormenter," is Miss Wade's memoir, and the pages are tragically honest - everything people used to write in private diaries but now post on Twitter.  Miss Wade is an orphan who believes everyone is false:  school friends were condescending, charming employers only pretended to like her, her fiance didn't really care for her, and the man she loved left her to marry a well-to-do woman nicknamed Pet, whom Miss Wade hates so much she lured Pet's servant away, a stormy girl unfortunately known as Tattycoram.

Is Miss Wade right or wrong about people?  We only see them from her point of view, and since it is always the same point of view, we tend to doubt it. Good is bad and bad is good: she is very perceptive, but at the same time mixed-up.  Yet she is not really a villain; she has had, unfortunately, one or two transactions with the villain of the novel.  And she kept cool.

We do get fed up with the extremes of good and bad. And  this is a strange tack for Dickens, whose characters usually are much funnier and yet have so much more depth.  I want to be Little Dorrit's best friend -  but what if I'm more like Miss Wade? I'm in the middle - like most of us.  Miss Wade and Clennam are both depressives  - that they have in common - and would have been a disaster together.  Little Dorrit takes care of everyone, but she does not know Miss Wade.   And that is probably for the best.