Joanna Russ (1937-2011), a literary critic and English professor at the University of Washington, is best known for her feminist science fiction novel, The Female Man (1975). Both men and women recommended it, but I was not a fan. It felt like being clobbered over the head with the smashing of sexual stereotypes.  We all loathed sexual stereotoypes, but the book seemed clumsy and unsubtle.

I had an opportunity to improve my opinion of Russ when I discovered her charming novel, Picnic on Paradise (1968), included in the Library of America volume, American Science Fiction: Four Classics (1968-1969).  This was Russ's first novel, and it is almost pure action-adventure, with a surreal setting and whimsical sensibility. Alyx, an agent who has been transported from ancient Greece to Paradise, a tourist planet, is commanded to guide a group of spoiled tourists to safety across a snowy mountainous terrain.  A commercial war has been declared on Paradise.  Neither Alyx nor I know quite what a commercial war is. 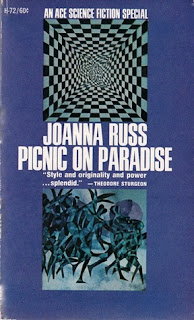 You don't know where you are at first.  Nor does the heroine. What the...?

She was a soft-spoken, dark-haired, small-boned woman, not even coming up to their shoulders, like a kind of dwarf or miniature - but that was normal enough for a Mediterranean Greek nearly four millennia ago, before super-diets and hybridization from seventy colonized planets had turned all humanity (so she had been told) into Scandinavian giants. 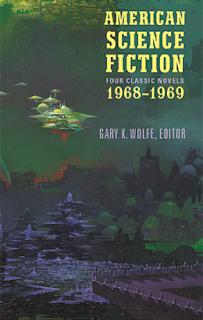 And because she is a small woman, there are  power struggles.  Some of the tourists so out of touch that they don't believe in danger - they fancy it's part of their fun package. And Gunnar, a famous mountaineer, believes he knows better than she does.  The novel is to a large extent about the bonding of the group, occasionally disrupted by competition. And for those who want more than a dangerous trek, there is some sex and romance.

This is super-light, but I can see why it's included in this surreal '68  LOA round-up of science fiction.

AND THEN I PICKED UP A COPY OF Russ's book of feminist literary criticism, How to Suppress Women's Writing, published in 1983 and reissued by University of Texas in 2018. Russ reports on the resistance of male critics to including women writers in the canon.  She has portrayed an academia where few women are hired as professors and even fewer women's books are taught in English classes.  The critic Harold Bloom is mentioned.

Russ writes about the suppression of radical women writers in publishing and academia.  She is obsessed with Charlotte Bronte's Villette, which I, too, deem one of the best novels of the nineteenth century.  She tries to order Villette for one of her classes, and discovers it is out of print.  And she is not interested in teaching Jane Eyre, which is the only book by Charlotte available.

I think it is no accident that the myth of the isolated achievement so often promotes women writers' less good work as their best work. For example, Jane Eyre exists, as of this writing, on the graduate reading list of the Department of English at the University of Washington. (This is the only PhD reading list to which I have access at the moment. I mention it not as a horrid example, but because it is respectable, substantial, and probably typical of first-rate institutions across this country.) Villette does not appear on the list. How could it? Jane Eyre is a love story and women ought to write love stories; Villette, “a book too subversive to be popular,” is described by Kate Millett as “one long meditation on a prison break. 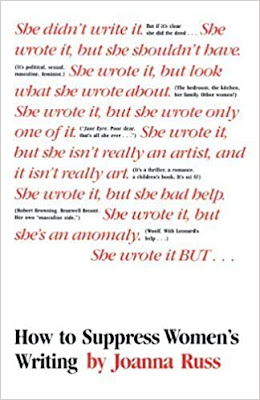 Russ is illuminating about stereotypes about  women writers: it is said they can't write, or their experience is limited, or they are amateurs, spinsters or   wives.  She sketches the history of reception of Virginia Woolf and Elizabeth Barrett Browning, both dismissed as unimportant in the mid-to-late 20th century.  I had low expectations of my English classes (though there were some great professors), and read these women writers in my leisure.  When else?

If there is one thing this book suffers from, it is Russ's attempt to do too much. She reports endless statistics about percentages of women writers in anthologies - we don't need pages of this. And she too often quotes critics Ellen Moers and Elaine Showalter, instead of writing her own views and citing the critics in footnotes.

A good, if slightly dated, history of women's writing, the canon, and feminist criticism in the mid-to-late 20th century.

Email ThisBlogThis!Share to TwitterShare to FacebookShare to Pinterest
Labels: How to Suppress Women Writers, Joanna Russ, Picnic on Paradise