Patricia Kennealy-Morrison died at age 75 on July 23 in New York City. You may have known her as a rock critic; I knew her science fiction.  She was a brilliant writer, but the headlines emphasized her relationship with Jim Morrison, which was a claim to fame, but hardly her most important accomplishment.

It's not that I don't love Jim Morrison. ("Break on through to the other side.")  And certainly Kennealy-Morrison was not reticent about their relationship:  she wrote a memoir in 1992,  Strange Days: My Life With and Without Jim Morrison, and was a consultant for the 1991 movie The Doors. 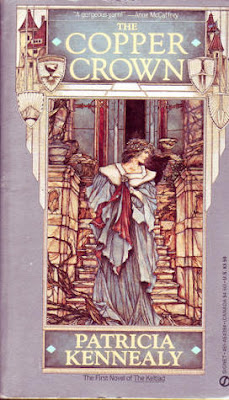 But of course she led a long, full life after Jim's death in 1971.  She continued to work as a journalist, and wrote several several science fiction/fantasy novels and mysteries.  I enjoyed  The Copper Crown and The Silver Branch, two of the novels in her Keltiad series.  I had no idea she was Jim Morrison's partner until I read the bio in The Copper Crown.

One thing for sure, the obituary will sell some books.  But typical for women to be remembered for their relationships rather than their work.