On the Shelves of a Small-Town Bookstore 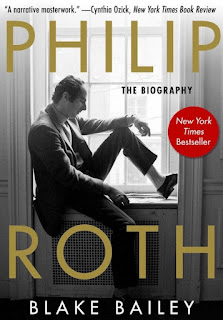 While browsing in a small-town bookstore, we were astonished to find Blake Bailey's controversial biography of Philip Roth, which was withdrawn by its publisher, W. W. Norton, after Blake was accused of sexual harassment and abuse. Mind you, he was accused, but neither tried nor convicted. That is the way the system works nowadays.  Blake, whom Roth had chosen as his biographer, was fortunate to find a new publisher in Skyhorse.  In a statement about their acquisition of the book, Skyhorse quoted the Authors Guild.

The answer to suppression of expression and ideas isn’t greater or responsive suppression, but greater public debate, which is silenced when a publisher prevents readers from reading a book and forming their opinions. A book is larger than its author; it is an addition to the often contentious public record for posterity.

As a proponent of free speech, I was cheered to see this book on the shelves of a small-town bookstore. Whether one approves of a writer or not - and I haven't the faintest interest in reading this book - we cannot ignore all the critics who lauded it, among them Cynthia Ozick and Elaine Showalter.  But Barnes and Noble does not stock Philip Roth: The Biography at any of its stores in my state.  (You can buy it online, though.)  Why, you may ask, do I care? Well, I abhor the J'accuse culture.  If I banned anything, it would be the cheesy romance novels which exploit women and make publishers rich.

The  new J'accuse movement was reborn a few years ago in Hollywood when female actors launched the @MeToo movement, which I call the WhoHasn'tBeen? movement.  Frankly, I've suffered much much worse things than harassment and gropings.  And I was shocked when Minnesota Public Radio canceled Garrison Keillor's popular "Prairie Home Companion" show and deleted all his work from its  website.  The good news is, Keillor now has his own website,  where you can listen to new episodes of A Writer's Almanac.

You may agree with me or not about the Roth biography, but here is some good news:  not only do I read brilliant books by authors I disapprove of but I also watch movies with actors and actresses whose lives seem scandalous:  that is, if I believed the tabloids got right.