Mary Stewart's Heroines on Vacation: Gianetta in "Wildfire at Midnight"

In the 1950s and 1960s, Mary Stewart wrote eleven so-called Gothic novels, now categorized as romantic suspense - which sounds  tackier.  Although her Gothics are in a class of their own, she does not garner the laurels she deserves.  In the 1970s  Stewart made a name for herself with her award-winning Merlin trilogy, The Crystal Cave, The Hollow Hills, and The Last Enchantment; these are reminiscent of Mary Renault's Alexander trilogy.

I admit, I am fonder of Stewart's Gothics. The mid-20th-century Gothic centered on a plucky, intelligent heroine who stumbled upon a mystery while visiting a castle, or traveling in a foreign country.  The heroine usually meets two handsome men, one a charming criminal, the other a less charming, ironical hero.  She has difficulty figuring out which is the hero and which is the villain.  Stewart's heroines run into drug smugglers, gold smugglers, jewel thieves, and murderers. However idyllic the setting, there is crime.

And yet Stewart transcends the Gothic formula by combining the "romantic suspense" with travel writing.  Her Shakespeare-quoting heroines travel to exotic, often remote, places.  A mystery unfolds, but I especially love her descriptions of the settings. 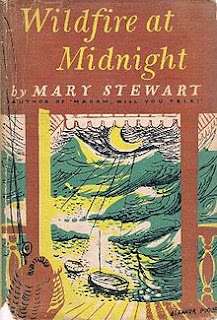 As for me, I haven't traveled this summer, so I turned to Stewart.  I reread Wildfire at Midnight (1956) and traveled with  Gianetta to Skye, an island in the Inner Hebrides of Scotland.  The narrator, Gianetta Brooke, named after her disreputable great-grandmother, Gianetta Fox, a famous artist's model, is a model herself for the Montefior salon in London.  She is run-down and in need of a vacation, so her mother, a vicar's wife and potter, recommends a little hotel in Skye.  And Gianetta can't wait to get away from her musings about her disastrous marriage, which ended in divorce.

What we love in Stewart's novels is the thoughtful, witty voice of the narrator.  Gianetta wryly tells us that her ex- Nicholas cheated  on her because she wasn't as sophisticated as she had seemed at the gallery where he met her.

What he had meant to marry was a modern Gianetta Fox, a composed young sophisticate...; what he'd actually got was only Gianetta Brooke, not long out of school, whose poise was a technique very recently acquired in Montefior's salon and the Mayfair mannequin factory.

Of course Skye is gorgeous, and Stewart describes in detail the beauties of the mountains and the sea.  And there is much witty dialogue in the small hotel, because Marcia Maling, a brilliant, sparkling actress, who hates walking, fishing, and mountain-climbing, is here to rest, like Gianetta - though Gianetta walks. "Adrian said I positively must vegetate, and I had just read a divine book on Skye, so here I am."

But guess who else is there?  Several writers - including Gianetta's ex-husband, Nicholas.


And then she learns that a ritual murderer is on the loose in the mountains. It is possibly one of the hotel guests. And, as you can imagine, since everyone is a suspect, everyone behaves badly.  There is a trace of Agatha Christie here.

Gianetta is not a helpless heroine.  She proves herself cool and quick-witted during a search for a young woman presumed dead. She continues searching after the others quit.  But the danger does not end there.

There is no time for romance in this sinister novel, which is why I consider this a mystery rather than "romantic suspense."  In Wildfire at Midnight, there is also a shrewd critique of the underlying insecurity of the glamour industry. And in Stewart's later Gothics, she diverges even more liberally from the Gothic formula.

My favorite of her books is This Rough Magic, set in Corfu.  But you are always safe in Stewart's hands.  She is the best of her Gothic peers.