Catch-up Notes: Pat Barker's "The Women of Troy" & Rose Macaulay's "What Not" 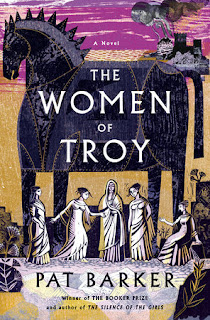 I am playing "catch-up" with these scribbled notes on two novels.  Though these books are far from my favorites, they will certainly appeal to other readers.  Who can resist Pat Barker and Rose Macaulay?

Before I go on, I admit that I am burned-out on retold myths. Yet I was eager to read Booker prize winner Pat Barker's The Women of Troy, the sequel to The Silence of the Girls.  And certainly her inventive versions are superior to most other writers' retold myths.

In The Silence of the Girls and The Women of Troy - and I suspect there will be a third book - the narrator is Briseis, Achilles's prize in the Iliad. ln the new novel, Briseis's status has improved:  pregnant with Achilles's child, she is now married to kind Alcimus. As a married woman, she has more freedom and can roam where she will.  She no longer works in the hospital - the war is over.  The Greeks are stuck in the camp, restless and claustrophobic, waiting for the wind to change. The women are terrified of their fate.

And so Briseis tries to lift the spirits of the women.  She comforts the slaves in the women's quarters, among them Hecuba (Priam's wife) and the traumatized Andromache , who are now concubines of Odysseus and Pyrrhus respectively. Cassandra is also enslaved, married to Agamemnon.  No one believes Cassandra's prophecy that Agamemnon's wife will murder both of them.  They think she is histrionic.

Barker amazes us with stylistic pyrotechnics and her keen understanding of psychology: she even gets into the head of violent, insecure Pyrrhus, who feels he can never live up to his dead father, Achilles. Pyrrhus botched the killing of Priam, who died in harrowing pain as Pyrrhus hacked away at his neck; now the rotting body is displayed on the beach. Although Barker can do almost everything, one episode went on far too long for me. An Antigone-like Trojan woman is determined to bury Priam, even though it is virtual suicide.  Somehow this dragged on and on, and seemed the least effective part of the novel.

And that is the problem with retold myths; spinning tales from epic can work, but Sophocles's tragedy cannot be adapted in prose.  I felt that Colm Toibin's House of Names, an elegant retelling of Aeschylus's Oresteia, failed for the same reason.  Well, not failed.  Pat Barker and Colm Toibin cannot fail.

I'm sure it's just me. I've probably read too many retold myths. 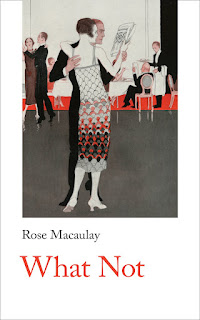 Rose Macaulay's What Not: A Prophetic Comedy( 1918) begins promisingly:  two women are hurrying from the Underground to to their office at the Ministry of Brains.  Here is the shocking part: the purpose of the Ministry is to promote eugenics. The working classes are in an uproar because the Mental Progress Act regulates who can marry whom and who can have children.  Snobbish Kitty Grammont, "something of the elegant rake, something of the gamin, something of the adventuress, something of the scholar," writes pamphlets in the Propaganda section with no twinge of conscience and parties on the weekend. The fanatical Minister, who is not allowed to marry because of idiots in his family, turns out to be a confused young man, and falls in love with Kitty. The only three-dimensional character is the charming Pansy Ponsonby, a whimsical socialite who sensibly ignores the government rules and is compassionate if not exactly brilliant. We're stuck with the romance of Kitty and the minister, alas. But we do like the Dadaistic "Stop It!" movement.

This book is very slight, yet much too long.  If you want to read Macaulay, try her masterpiece, The Towers of Trebizond. 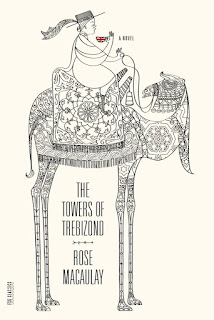 Email ThisBlogThis!Share to TwitterShare to FacebookShare to Pinterest
Labels: Rose Macaulay, The Women of Troy, What Not