A Real Pleasure: Rereading The Camomile Lawn, by Mary Wesley 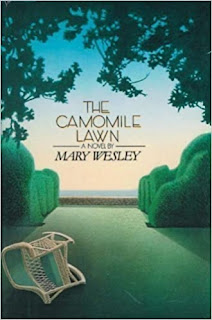 I have just reread The Camomile Lawn, one of my favorite books.  What a pleasure to read!  And so naturally I am musing about the splendid career of Mary Wesley, who published her first novel, Jumping the Queue, when she was seventy-one.  For many readers, that was the biggest part of the story.  Actually, it is a pretty marvelous part.  My goodness, we all thought, there's hope for us yet.

But the real wonder of her elegant fiction is its appeal to a broad spectrum of readers.  The critics loved her, library-goers reserved her books and hugged them to their bosoms, and fans of  Penelope Lively, Elizabeth Jane Howard, and even Rosamunde Pilcher enjoyed them.
Wesley's second novel, The Camomile Lawn, is flawless and fun.  In this slightly quirky literary family saga, which spans half a century, everybody sleeps incestuously with everybody, without much harm.  The novel begins before the war, when five cousins pay their annual visit to Uncle Richard and Aunt Helena in idyllic Cornwall.   (Four of them are in their late teens and early twenties, while the youngest,  Sophy, an unhappy orphan, lives with Richard and Helena.)

With Wesley's buoyant prose, the description of the cousins' arrival in Cornwall is charming and witty.

The London train snaked into Penzance.  Calypso, Walter and Polly sprang from it with zest, kissing Helena, hugging Sophy and crying, "Well, well, how are you?  Isn't this lovely?  Isn't this wonderful? What air after London!  Let's grab the luggage, find a porter.  Where's the car?  How's Uncle Richard?  How's his leg?"  Their anxiety always seemed to be addressed to the artificial leg, which indeed went wrong oftener than the active member.

And so we are introduced to the bold and reckless cousins: Oliver, who ran away to fight in the Spanish Civil War and was slightly wounded, is the master of their games, including their annual Terror Run along a cliff at night;  saucy, beautiful Calypso laughs as she fobs off Oliver's advances, reminding him she intends to marry money; charming Polly is savvy and unconventional; while her brother Walter wants to join the Navy so he can save the Jews.

The family breaks up when England declares war with Germany: Oliver and Walter enlist, while Calypso and Polly live in London and work in intelligence. (Sophy is at school.)  And Calypso and Polly admit they are having the time of their life during the war:  their work is interesting, they go to parties, and have many affairs. Although Calypso has married a rich man, he is is in Egypt for the duration of the war, so she gads about.

One of the most remarkable things about Wesley's books is that she writes from a very adult vantage point. Oddly, I don't see much of that in contemporary books. Wesley's women are strong and don't whine about the vagaries of men, because they are having casual sex, living like their men.  Only Helena, who leaves Richard and moves to London with her lover,  Max, a Jewish refugee and a musician, suffers from jealousy.  She fumes, because Max sleeps with every woman in the book!  That is too much for any woman to bear.  Resist, I kept thinking.  Well, Calypso think he is mediocre in bed.  But in Wesley's novels, sex is usually a joyous mating of satyrs and lusty women.  It is suitable that in the final scene, Max's funeral,  two of the cousins become lovers. 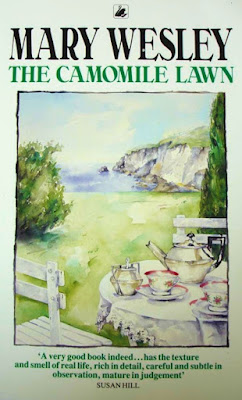