A Neglected American Novel: "The Grass Dancer" by Susan Power 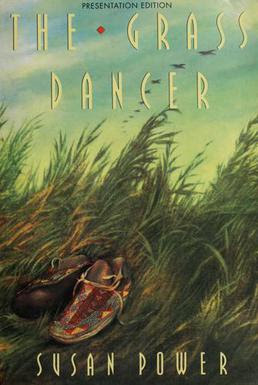 So far, in this (I hope) unpretentious series on neglected American women writers, I have dawdled in the mid-twentieth century.  I have paid homage to The Collected Stories of Hortense Calisher, published in 1975, and Elizabeth Enright's The Riddle of the Fly and Other Stories in1955.

But I can't stay in that period forever. With regrets, I scratched out notes on Sue Kaufman's witty 1967 novel, Diary of a Mad Housewife,  because I have read this masterpiece too many times.  For my third short piece, I have chosen to write about Susan Power, a Native American novelist.  Born in Chicago in 1961, educated at Harvard and the Iowa Writers' Workshop, Power is a member of the Standing Rock Sioux tribe and has written three books of fiction. And I just reread her first novel, The Grass Dancer, published in 1994.  Luckily, it is still in print.

While making the rounds of bookstores in the '90s, I was doubtless drawn to the cover illustration, a depiction of tall green and reddish grasses sweeping at an angle towards the greenish sky. And near the corner of the cover, a pair of colorful  beaded moccasins have been kicked off in the grass.

And so I bought the book and went home and avidly read it. In 1995 The Grass Dancer won the PEN/Hemingway Award.


And it was well-deserved.  I marvel at Power's lyricism and pitch-perfect storytelling.  Set on a reservation in North Dakota, her striking narrative goes backwards in time, tracking the interrelated lives of characters in the same community on the res. It begins in 1981, goes  back in time chapter by chapter, to 1864, and then comes back full circle.  These vibrant tales snap with wit and vigor - and the time goes fast.

Power is a master of magic realism and the spirit world. Witches cast spells and ghosts communicate with the living.


In the opening story, Charlene Thunder attends a powwow.  She  has a crush on the handsome boy, Harley Wind Soldier, who can't seem to get free of the tragedy of the death of his father and  brother in a car crash.  Since they died, his mother Lydia hasn't said a word.  She sings at powwows, and all the women tape her songs, but this hardly makes for a happy home.

Charlene's grandmother Mercury Thunder watched from her chair, shaking her large head at the girl's foolishness.

"Those Wind Soldiers are very bad news," she had warned just a week earlier.  But Charlene ignored her.

"Yes, you can.  You love yourself, you love your family, and you don't let your feelings run around and jump into someone else's hand."  Mercury had made a fist.  "You grab on to your own life and push it around to where you want it to go."

Alas,  Charlene does not attract Harley Wind Soldier, who  is thunderstruck by the sight of Pumpkin, a vibrant red-haired young woman wearing the costume of a grass dancer.  The grass dance is for men, but she insists on competing and no man resents her win. She becomes the grass as she dances.  And then, tragically,  literally, she becomes the grass.

There are so many vivid characters, so many brilliant metaphors, such lovely prose, and I was spellbound by Power's perfect timing and mastery of time.   One can see the influence of Louise Erdrich, but Susan Power is a remarkable writer in her own right, and she has been overlooked.  If you missed The Grass Dancer in the '90s, add it to your TBR list now).  I have also read two of her other books, one published by a small press, the other by a university press, and they are even more obscure.  (That's what online shopping is for.)