A Comedy of Suspense: Charlotte Armstrong's "A Dram of Poison" 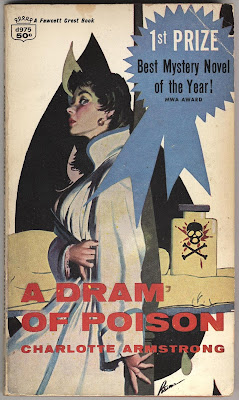 A stickie note commanded: "Do floors!"

I'd intended to offer libations to the household gods and experiment with vacuum cleaner attachments to assail grimy baseboards. But I ignored the memo to self and spent the day productively reading Charlotte Armstrong's charming Edgar award-winning classic, A Dram of Poison (1956).

Charlotte Armstrong, who is occasionally referred to as the Queen of Suspense (one of many), is my latest literary discovery.  Her plots are shatterproof, her characters ordinary yet memorable, and her fast-paced prose seems effortless.  Armstrong's books often have a hint of California noir, and two of them have been made into movies, The Unsuspected (1945) and Mischief (1950).

What I didn't know is that she could be so funny.  A Dram of Poison is at heart a gentle comedy of suspense. The hero, Mr. Gibson, a middle-aged bachelor who teaches poetry at an obscure college, marries Rosemary, who is 22 years younger, for altruistic reasons. Poor Rosemary is sick, hopeless, helpless, plain, destitute, and about to be evicted, because her late father, a cranky professor emeritus who spent his latter days writing angry letters to the editor, left her nothing.  And so  Mr. Gibson to the rescue!  They move into a charming cottage and, adorably, they fall in love.

But, alas, it doesn't end there.  Oh, no. This is not a romantic comedy but a comedy of suspense.  After dining at a restaurant to celebrate Rosemary's recovery, they have a car accident and Mr. Gibson is in the hospital for weeks with a broken leg.  He calls his domineering sister, Ethel, and asks her to fly out and look after Rosemary.  I shall not say much more, except that Ethel almost breaks up (or do I mean down?) the couple.

If you lived with Ethel, this is the kind of thing you'd hear day and night.

"The fact is, old dear," she continued affectionately, "all of us can't live in a romantic, poetical and totally gentle world.  Some of us have to face things as they are."  Her bright eyes were direct and honest and he feared they were wise.  "Face reality."

But the dram of poison is the real comedy.  I won't tell you the details, except that a Shakespeare-quoting bus driver rounds up  passengers to help Mr. Gordon out of a predicament.

Email ThisBlogThis!Share to TwitterShare to FacebookShare to Pinterest
Labels: A Dram of Poison, Charlotte Armstrong